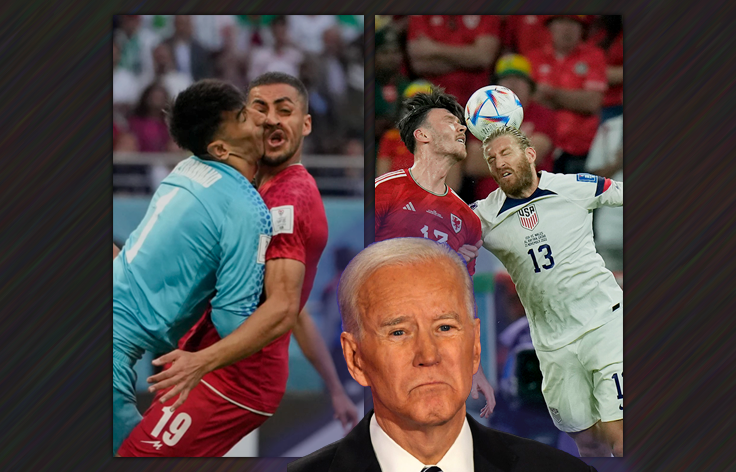 Trigger Warning: This article contains graphic depictions of an international soccer competition that most of our readers will find offensive and disturbing. Please proceed with caution.

Editor’s Note: The Free Beacon’s decision to report on the World Cup does not in any way constitute an endorsement of soccer, a fundamentally evil and anti-American enterprise.

President Joe Biden and the U.S. men’s soccer team humiliated themselves and their country on Monday by failing to defeat Wales in the opening round of the World Cup.

The United States finished with a 1-1 tie against Wales, a quasi-fictional nation state with a population roughly the size of Chicago. The embarrassing result came after Biden attempted to rally the U.S. players with an inspirational phone call.

“I tell you what, man, you’ve got some of the best players in the world on your team and you’re representing this country and I know you’re gonna play your hearts out,” the president said before the game. They may have played their hearts out, but that doesn’t make the tie score any less of a national disgrace.

At least the United States did better than Iran. The terrorist nation lost to England 6-2 despite the relative home-field advantage of playing on Middle Eastern soil in a stadium where alcohol was banned. Like Iran, the host country Qatar has been widely criticized for its disregard for basic human rights.

The result suggests Iran does not have what it takes to compete on an international stage. For example, the team’s goalkeeper was carted off the field early in the game after colliding with his own teammate, which was very embarrassing. The Iranian team managed just 8 shots while committing 14 fouls.

“No one f—s with a Biden and gets away with it,” the president has said on several occasions. Alas, the crown prince continues to humiliate Mr. Biden and suffer no consequences. What an embarrassment.

The terrorism-supporting nation that bribed FIFA in order to host the World Cup apparently doesn’t want anyone to enjoy themselves. As if watching soccer wasn’t boring enough already, Qatar announced a ban on alcohol sales in stadiums just two days before the tournament began.

Days earlier, FIFA rejected the Danish national team’s request to practice in shirts promoting “human rights for all,” presumably because Qatar does not believe in human rights. Thousands of migrant workers are believed to have died building the stadiums and other infrastructure for this year’s tournament.

It’s yet another reason why soccer is the single greatest threat to freedom and democracy.