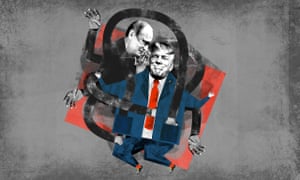 The Fateful Loss of Vigilance:

“The FBI and the CIA were slow to appreciate the extensive nature of these contacts between Trump’s team and Moscow. This was in part due to institutional squeamishness – the law prohibits US agencies from examining the private communications of US citizens without a warrant…”

How Trump walked into Putin’s web

The inside story of how a former British spy was hired to investigate Russia’s influence on Trump – and uncovered explosive evidence that Moscow had been cultivating Trump for years. By Luke Harding

“Steele had found prima facie evidence of a conspiracy, but by and large the US public knew nothing about it. In November, his dossier began circulating in the top national security echelons of the Obama administration. But it was too late.”
Source: How Trump walked into Putin’s web | News | The Guardian