COX’S BAZAR, Bangladesh (Reuters) – Mohammed Ismail says four of his relatives were killed by gunmen at the Rohingya refugee camps in Bangladesh between April and October last year. He recalls the September night when, he says, he almost met the same fate: masked men kidnapped him, cut off parts of his left arm and leg and dumped him in a canal. 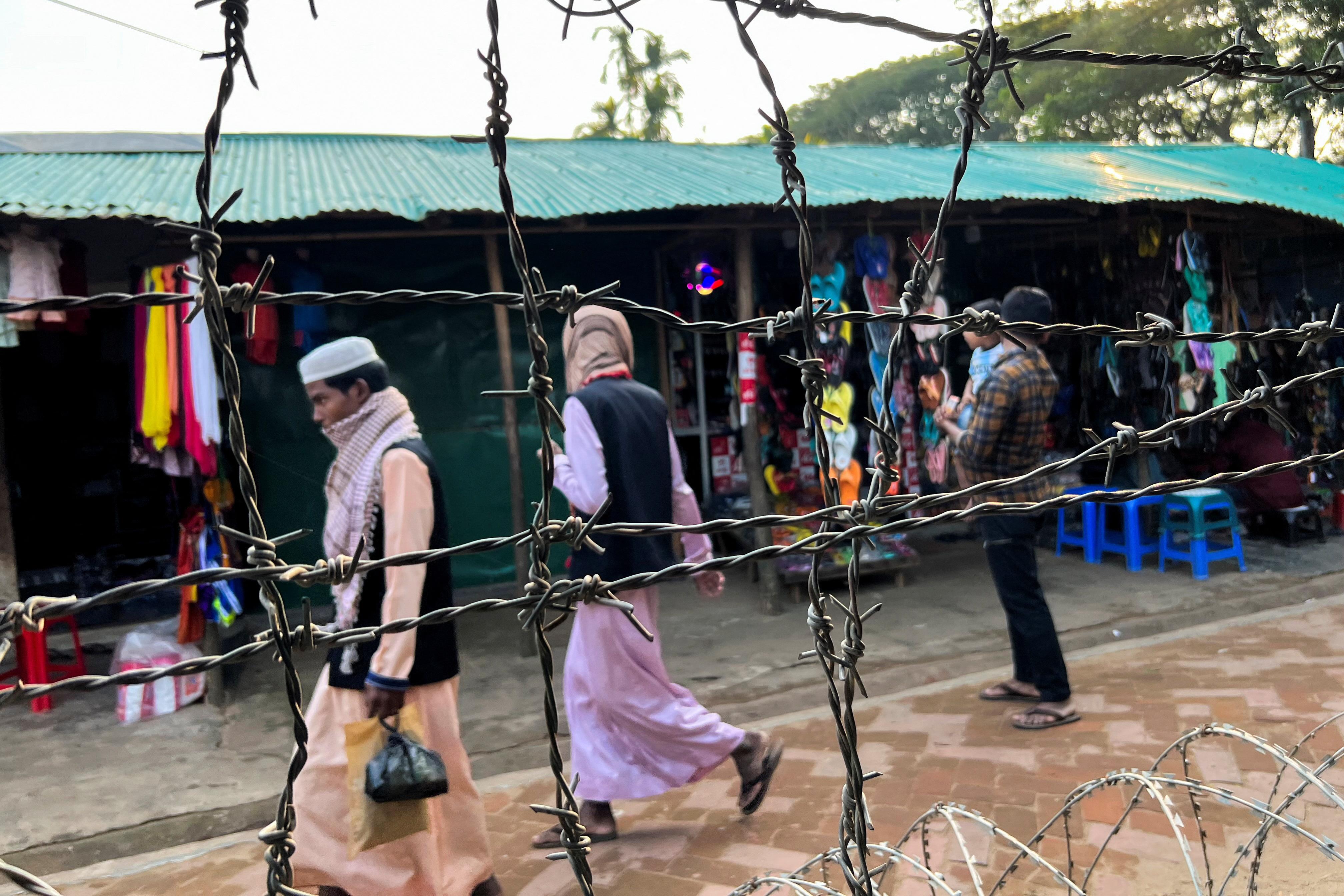 Barbed wire is seen on the side of a refugee camp in Cox’s Bazar, Bangladesh, December 30, 2022. REUTERS/Ruma Paul

“They repeatedly asked me why I gave their personal details to the police,” Ismail, seated on a plastic mat with his left limbs covered in white bandage and cloth, told Reuters at the Kutupalong refugee camp. “I kept telling them I didn’t know anything about them and had not provided any information.”

About 730,000 Rohingya, a mostly Muslim minority present in Myanmar for centuries but denied citizenship in the Buddhist-majority nation since 1982, fled to Bangladesh in 2017 to escape a military crackdown. Including others who migrated in prior waves, nearly 1 million live near the border in tens of thousands of huts made of bamboo and thin plastic sheets.

An increasing number of Rohingya are now leaving Bangladesh for countries such as Malaysia and Indonesia via perilous boat journeys, as rising crime in the camps adds to longstanding troubles like a lack of educational and work opportunities and bleak prospects of returning to military-ruled Myanmar.

Crimes recorded in the camps – including murder, kidnapping, rape, robbery, human trafficking and narcotics trade – have soared in recent years, according to data that Bangladesh police shared exclusively with Reuters. Murders rose to 31 in 2022, the highest in at least five years.

“A series of murders of Rohingya men, including some leaders, at the camps have sparked fear and concern about militant groups gaining power, and local authorities failing to curb increasing violence,” said Dil Mohammed, a Rohingya community leader in the camps.

“That’s one of the main reasons behind the surge in Rohingya undertaking dangerous sea voyages.”

Police declined to comment on questions about Ismail or the issues at the camps beyond the data they shared.

Data from UNHCR, the U.N. refugee agency, show that about 348 Rohingya are thought to have died at sea in 2022, including in the possible sinking late last year of a boat carrying 180 people, making it one of the deadliest years since 2014. Some 3,545 Rohingya made or attempted the crossing of the Bay of Bengal and the Andaman Sea to Southeast Asian countries last year, up from about 700 in 2021, the UNHCR said.

‘BETTER TO DIE AT SEA’

Ismail, 23, said he believes insurgents targeted him and his relatives, who were aged between 26 and 40, after his cousins rejected repeated approaches over the preceding three or four years to join a militant outfit, the Arakan Rohingya Salvation Army (ARSA). The group has fought against Myanmar’s security forces and some Rohingya say it has been recruiting fighters, often through coercion, in the Bangladesh camps.

In letters to the UNHCR in November and this month seen by Reuters, Ismail said he witnessed the killings of two of his cousins on Oct. 27.

Reuters could not independently verify the deaths of Ismail’s relatives, but his account was corroborated by his brother, Mohammed Arif Ullah, 18. The UNHCR declined to comment on Ismail’s case, citing safety and privacy risks.

About a dozen Rohingya men in the camps, who spoke to Reuters on the condition of anonymity for fear of reprisal, said that ARSA militants, whose stated goal is to fight for and restore the rights and freedom of the Rohingya in their ancestral homeland, were involved in criminal activities in the camps, including human and drug trafficking.

An ARSA spokesperson did not respond to questions Reuters sent by email and Twitter about the fates of Ismail and his family, and its alleged involvement in trafficking and attempts to recruit fighters in the camps. The group said on Twitter in December that its activities were confined to Myanmar.

“Any crimes and incidents happening in the camps… in all such happenings, most of the time innocent Rohingya refugees from the camps are labelled as ARSA members and extra-judicially arrested by the authorities,” it said.

The UNHCR acknowledged concerns about crime in the camps, saying it had increased its presence so that refugees could access protection and support.

Reuters could not independently obtain evidence of drug trafficking by ARSA, though previous Reuters reporting described how refugees had been drawn into the trade out of desperation.

Accounts of violent crime in the overcrowded refugee settlements are adding to pressure on densely populated Bangladesh, which has struggled to support the Rohingya and has called for Myanmar to take them back.

Mohammed Mizanur Rahman, Bangladesh’s Refugee Relief and Repatriation Commissioner based in Cox’s Bazar, said the government was trying to control crime, including through a separate police battalion posted to the camps, but that “criminals just flee across borders when we run an operation”.

“For me, ARSA are thugs, hoodlums, hopeless people who now depend on drug peddling and extortion,” he said. “They don’t have a country, society, and nobody recognises them. That is why they are involved in crimes and life is meaningless to them.”

Human Rights Watch said this month, in a report based on interviews with more than 40 refugees, that Bangladesh police’s Armed Police Battalion, which took over security in the camps in 2020, was committing extortion, arbitrary arrests, and harassment of Rohingya refugees. The battalion did not respond to emails seeking comment.

Rahman said returning the Rohingya to Myanmar was the “only solution” to their problems. But Myanmar’s military junta, which took power in a coup two years ago, has shown little inclination to take them back. A Myanmar government spokesman could not be reached for comment.

Ismail, who lives with his parents, wife and brother, says he fears for his life and understands why some Rohingya are fleeing Bangladesh.

“It’s better to die at sea than being killed by terrorists or dying every day living in fear,” he said.

The police data show that crimes in the camps and the number of Rohingya arrested in Bangladesh last year were 16 times the levels of 2017 – a significant jump even after accounting for the influx of refugees. Police arrested 2,531 Rohingya and registered 1,220 cases last year, up from 1,628 arrests and 666 cases in 2021.

About 90% of cases last year, and a similar proportion of arrests, involved murder, illegal use of weapons, trade in narcotics, robbery, rape, kidnapping, attacks on police and human trafficking. Reuters could not determine how many of these resulted in convictions.

The murders of 31 Rohingya marked an increase from a previous high of 27 in 2021. Related arrests reached 290, from 97 a year earlier. Drug-related cases and arrests also soared.

Khair Ullah, a senior Burmese language instructor at the Development Research and Action Group, an NGO, said that besides concern about crime, the refugees were frustrated because about 90% of them had no education or employment.

“They are worried about their future. They can’t support their old parents,” said Ullah, 25, who is Rohingya and lives in the camps. “What will happen when they have kids? The other big issue is that there’s no hope of repatriation from here, so they’re trying to leave the camps illegally.”

Reuters spoke with several refugees who returned to the Bangladesh camps after abandoning journeys to Malaysia, via Myanmar, out of trepidation.

Enayet Ullah, 20, who is not related to Khair Ullah, arrived in Bangladesh in 2017 with his family. In December, he said, he saw the bodies of two Rohingya men who had been killed in the area of the camps where he lives.

“When I saw their bodies, I was traumatised,” he said. “I thought I could have died this way. Then I decided to leave the camp for Malaysia.”

Taking a boat from Teknaf in Bangladesh with nine others on the night of Dec. 13, Ullah said he reached the Myanmar town of Sittwe the next day. He had arranged for traffickers to take him to Malaysia for 450,000 taka (about $4,300).

“More Rohingya were supposed to join us and then a bigger boat would sail for Malaysia,” Ullah said. “They were waiting for a green signal to start the voyage. But my gut feeling was that the journey wouldn’t be safe.”

He got cold feet and asked the traffickers to send him back to Bangladesh for 100,000 taka.

Ullah laments that after more than five years in the camps, his homeland seems as far away as ever.

“No education, no jobs. The situation will only deteriorate as time passes by,” he said.

Those who reach Malaysia – where there are about 100,000 Rohingya – often find their situation similarly dire. Deemed illegal immigrants, many are jobless and complain of harassment by police. And the deteriorating political situation in Myanmar since the coup has dashed any hopes of repatriation in the near term.

Mohammed Aziz, 21, said he pulled out of a sea trip to Southeast Asia after he saw pictures of boats that traffickers were using, and felt they were too small. He said he had to pay 80,000 taka for the trip to the Myanmar coast from Bangladesh and back.

“People are risking their lives on sea journeys as there is no future here and criminal activities are rising,” Aziz said. “But I’ll beg them not to take this dangerous sea route. You can end up dying at sea.”