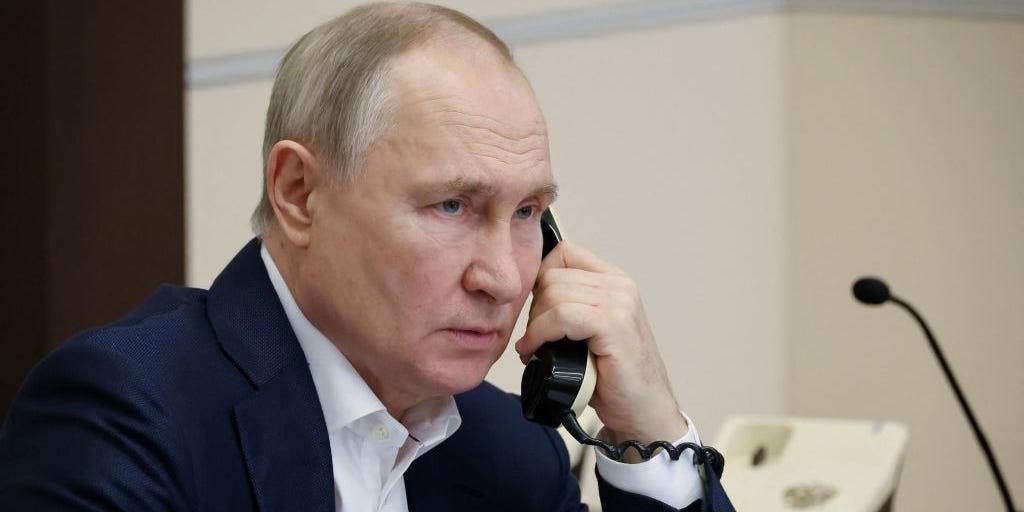 Russian President Vladimir Putin talks on the phone as part of a nationwide charity campaign, in Moscow on January 3, 2023.

Russia’s embassy in Sweden on Tuesday shared a map of Europe that showed Ukraine with its internationally recognized borders, which goes against Russian President Vladimir Putin’s unrecognized land claims in the country.

In 2014, Russia invaded Ukraine and illegally annexed Crimea — a peninsula on the Black Sea. The annexation of Crimea prompted outcry across the globe and drove a wedge between Moscow and the West.

Last February, Russia launched a large-scale invasion of Ukraine, and in September, even as the war raged on, Putin illegally annexed four Ukrainian territories — Donetsk, Luhansk, Kherson, and Zaporizhzhia — following referendums that were decried as a sham by leaders around the world. At the time, Putin announced that there were “four new regions of Russia.” Though Putin claims these regions as part of Russia, the territories are not fully controlled or occupied by Russian forces.

The map shared by Russia’s embassy in Sweden, which claimed to show gas prices in Europe, did not depict these regions as Russian territory.

The Kremlin has taken extreme steps to censor information on the war in Ukraine, making it a crime to spread “false information” about the Russian military — punishable by up to 15 years in prison. It’s unclear if this map violates this law, but critics of the war in Ukraine have ended up behind bars.

The Russian embassy in Sweden did not immediately respond to a request for comment from Insider.

The war in Ukraine has gone poorly for the Russian military, which has suffered heavy casualties and struggled to make gains. Ukraine, paying a heavy toll of its own, has regained control of a significant chunk of the territory Russia occupied in the early days of the fighting, including in the regions Putin now claims as part of Russia. But there is still heavy fighting in the country’s east as Russia continues conduct strikes in civilian areas across Ukraine.