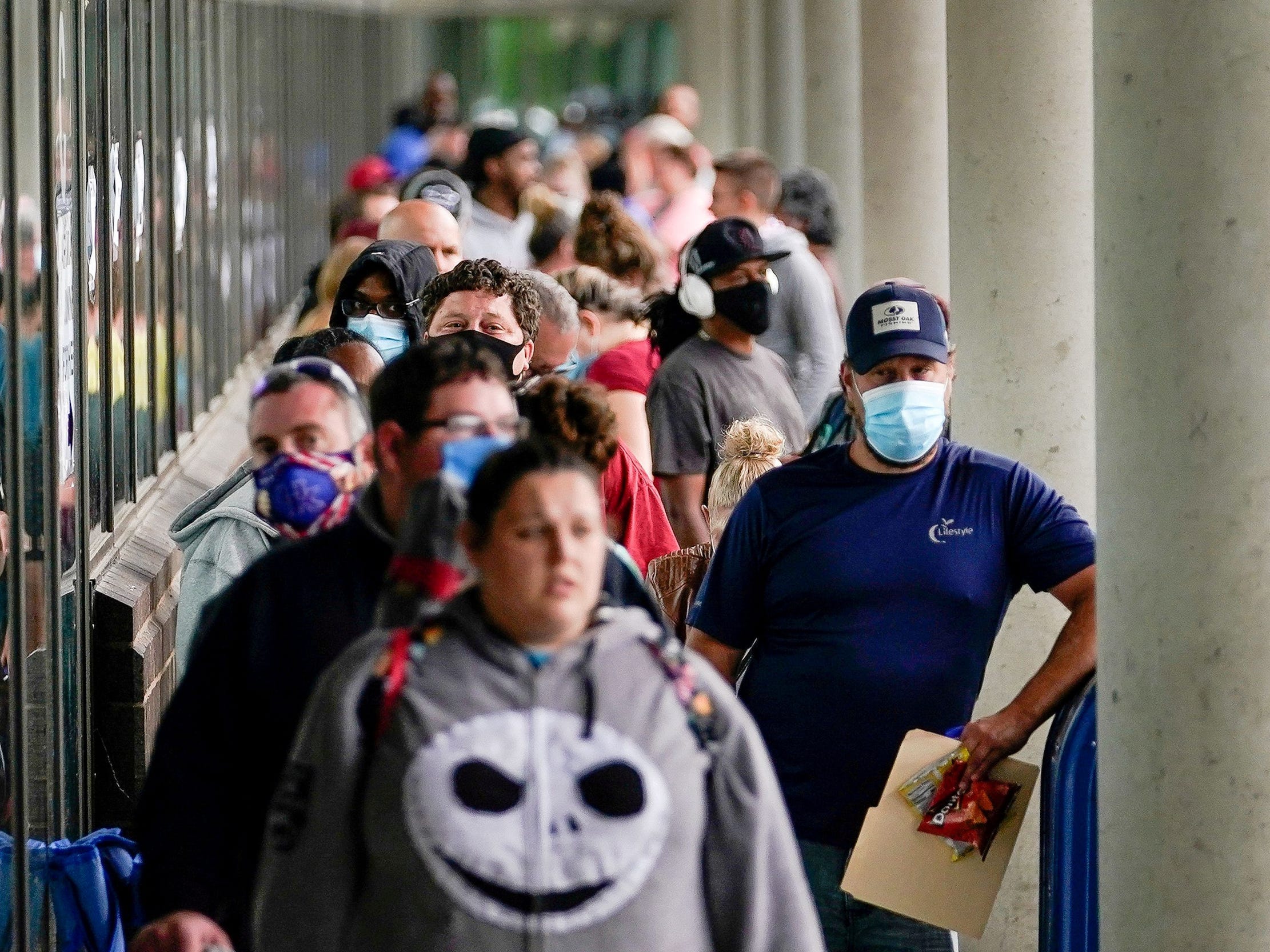 Hundreds of people line up outside a Kentucky Career Center hoping to find assistance with their unemployment claim in Frankfort, Kentucky, U.S. June 18, 2020.

Despite big companies like Microsoft, Salesforce, and Meta announcing job cuts, the latest data show that the broader economy has yet to see major layoffs.

While not all people who are laid off apply for benefits and the claims may include other people, like those who qualify and have been furloughed, the number is closely watched by economists as an indicator of whether or not large-scale layoffs are happening.

The Department of Labor data shows that there hasn’t been a large climb in US initial jobless claims. Instead, seasonally adjusted claims have been relatively low week after week, unlike back in March 2020 when claims soared and peaked in early April. That strongly suggests that the overall US economy isn’t seeing the kind of large-scale layoffs that typically mark a recession.

And data from the Bureau of Labor Statistics’ Job Openings and Labor Turnover Survey (JOLTS) program also shows shows layoffs in the US have been low. The layoffs and discharges rate was 0.9% in November 2022, the most recent month of data available — same as it has been for almost every month in 2022.

Despite the low jobless claims and layoff data in the overall economy, some companies and sectors are still seeing job cuts. Microsoft and Crypto.com are just two big tech companies that made recent layoff announcements. And more workers are worried about being next to be laid off, according to a December survey from LinkedIn showing that almost 40% of US workers “are nervous about being laid off.”

The tech sector has seen several waves of layoffs, but that doesn’t mean your job will be next.

Cory Stahle, an economist at Indeed, told Insider that “tech jobs account for a very small portion of total employment.”

“So even though these headlines kind of catch our attention, we haven’t seen that type of layoff behavior carrying over into the other industries where there’s even more people employed,” Stahle said about tech. “And so that’s why we’re seeing layoff numbers that are continuing to be pretty low and historically low and we’re seeing claims numbers continuing to be low as well.”

The robust labor market adds to the notion that a recession may not happen. Mark Zandi is one economist that thinks that there’s a chance a recession can be avoided.

“The deeper I look into the bowels of last week’s job market data, the more I think we can skirt a recession,” Zandi, chief economist of Moody’s Analytics, said on Twitter on January 8. “That’s because businesses aren’t laying off workers and unemployment is at a half century low, but regardless, job market slack is forming, and wage pressures are abating.”

Sky-high inflation has been cooling with the year-over-year rate plunging from 7.1% in November to 6.5% in December, meaning this inflation figure has dropped for six straight months. Inflation cooling could mean the Federal Reserve won’t have to raise interest rates much higher, improving the odds that a US recession could be out of the picture.

“And so those are encouraging signs for a soft landing,” Stahle added, referring to the Fed’s ideal scenario of bringing inflation down while also avoiding a recession.

Even if there isn’t a full-blown recession, 2023 could still be a tough year for workers. Aaron Terrazas, chief economist at Glassdoor, said “whether or not the economy falls into recession or gets by without one I think loses sight of what’s actually important.”

“And what’s actually important is how people are feeling about their work, about their incomes, and about their lives,” Terrazas told Insider. “And the reality is 2023, at least the first half of 2023, is likely to see a slowing economy.”

“And increasingly right now that looks like the path that we’re on — with the labor market slowing, inflation starting to come down — but not the cataclysmic collapse that many have come to associate with that term recession.”