Only a few active-duty service members were arrested, but the mob included dozens of veterans from all branches of service including the founder of the Hawaii Proud Boys Nick Ochs, a former Marine, and other right-wing group leaders.

The failed insurrection in the heart of the nation’s capital on Jan. 6 has prompted a reckoning in the military, which has battled racism and extremism in the ranks for decades. 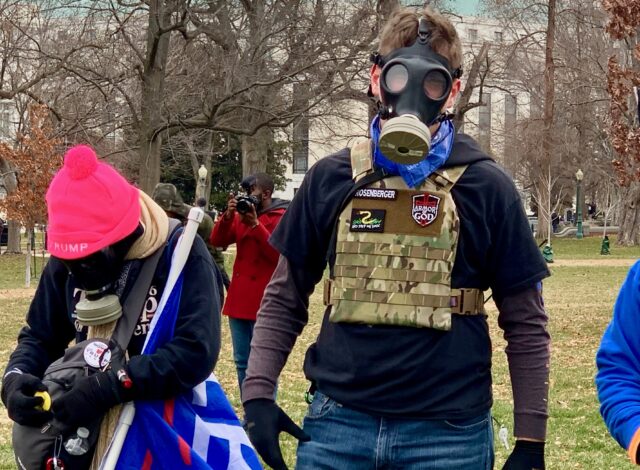 A Trump supporter stands outside of the U.S. Capitol on the same day hundreds stormed into the building.

Concerns were so high that the FBI took the extraordinary step of vetting all of the 25,000 National Guardsmen, including about 200 from Hawaii, deployed to Washington, D.C., for President Joe Biden’s inauguration amid fears of an insider attack.

The Pentagon’s inspector general also announced that it would launch an investigation into whether the military is doing enough to stamp out banned ideologies and activities.

The Pentagon faces a delicate balance in maintaining a right of expression for service members while preventing the spread of hate.

The rules appear clear when troops are in uniform, but what about when they’re off-duty? And how do you crack down on extremists in the National Guard, whose members only serve part-time.

For example, members of the armed forces are allowed to express personal opinions on political candidates, contribute to campaigns and attend political events as spectators. But they may not engage in political activities in an official capacity and never in uniform.

All military personnel undergo background investigations, are subject to continuous evaluation and have to complete periodic training to make sure they understand the rules.

The National Guard helped protect the U.S. Capitol in the days after pro-Trump supporters stormed the building.

CNN reported Monday that 21 of those facing federal charges in the Capitol violence were current or former members of the U.S. military, including two soldiers and two guardsmen. It said that was more than double the proportion of service members and veterans in the adult U.S. population.

The 17 veterans included six former soldiers, eight former Marines, two former sailors and one who was in the Air Force, according to the broadcaster’s analysis of Pentagon and court records. CNN said service records showed that at least one served in Vietnam while others fought in Iraq and Afghanistan.

Some defendants have insisted that they participated in the pro-Trump rally but didn’t enter the Capitol or engage in violence, often despite photos and videos posted on social media showing the contrary.

“The job of the Department of Defense is to keep America safe from our enemies, but we can’t do that if some of those enemies lie within our own ranks,” he said.

Experts say drastic steps will be needed to stamp out a problem that has existed for decades. Timothy McVeigh, who carried out the 1995 Oklahoma City bombing, was a Gulf War vet.

There’s no way to know how widely extremist ideologies have permeated among the approximately 1.3 million members of the military and some 18 million veterans.

Carolyn Gallaher, who has written about right-wing and militia movements, said extremist groups are often formed by veterans or recruit heavily among them.

“Anti-government groups want people with military experience,” she said in a telephone interview.

She also worries that military commanders often look the other way when faced with extremist attitudes as long as they’re not causing trouble on the job.

“The military should not be a ground for white supremacists and white nationalists and militias to get military training and then use it against the government,” she said.

The military already began implementing new measures amid the anti-racist protests following the killing of George Floyd. The Pentagon banned the display of the Confederate flag on military installations last year despite opposition by Trump.

Several lawmakers want to ensure active-duty service members and veterans involved in the Capitol attack are brought to justice.

Rep. Kai Kahele, an Air Force veteran and a commissioned officer in the Hawaii National Guard, joined a bipartisan group in calling last month for a probe of extremists among those with links to the military.

The Jan. 14 letter, which was sent to the Defense and Justice departments, also asked about administrative and legal tools available to prosecute those involved in the violence, including active-duty troops, retirees, veterans and federal contractors.

“We are concerned about further participation in insurrection or rebellious activities by current or former service members that contravenes the oath we took to protect this country,” the lawmakers wrote.

Kahele’s office said Monday it was still waiting for answers but had been told it would take more time than usual due to the transition of administrations.

Talking Feds
<p><strong>TALKING FEDS </strong>is a roundtable discussion that brings together prominent former government officials, journalists, and special guests for a dynamic and in-depth analysis of the most pressing questions in law and politics.</p>
The FBI: The Weather(ed) Bureau
by Harry Litman | L.A. Times Studios

No government agency bore the impact of Trump’s wrath more than the Federal Bureau of Investigation. Trump singled out the Bureau, the traditional crown jewel of U.S. law enforcement agencies, for outrageous and vicious slander. Three of the country’s most prominent and thoughtful experts on the FB–Frank Figliuzzi, Andy McCabe, and Asha Rangappa– discuss the damage the last four years inflicted and what the Bureau now needs to do, including to respond to the grave threat of domestic terrorism.