Listen to this article
2022-11-21T16:34:10Z
A 5.6-magnitude earthquake rattled Indonesia’s West Java province on Monday (November 21), a local official said. A government official from Cianjur, the town where the epicenter of the quake was located, told news channel MetroTV that up to 20 people had died and 300 more were injured.

A powerful earthquake killed more than 160 people in Indonesia’s West Java province on Monday, with rescuers searching for survivors trapped under the rubble amid a series of aftershocks.

The epicentre of the 5.6 magnitude quake was near the town of Cianjur in mountainous West Java, about 75 km (45 miles) southeast of the capital, Jakarta. The region is home to over 2.5 million people.

West Java governor Ridwan Kamil said on Instagram that 162 people had been killed and 326 were injured.

Indonesia’s disaster mitigation agency (BNPB) still placed the death toll at 62 and rescuers were searching for 25 believed to be trapped under rubble and its spokesperson said the search would continue through the night.

Ridwan told reporters that given many buildings have collapsed, the death toll could rise.

“There are residents trapped in isolated places … so we are under the assumption that the number of injured and deaths will rise with time.”

Indonesia straddles the so-called “Pacific Ring of Fire”, a highly seismically active zone, where different plates on the Earth’s crust meet and create a large number of earthquakes and volcanoes.

The BNPB said more than 2,200 houses had been damaged and more than 5,300 people had been displaced. Ridwan put that number at 13,000 and said they would be spread out at various evacuation centres across Cianjur.

Electricity was down, disrupting communications, authorities said, while landslides were blocking evacuations in some areas.

Hundreds of victims were being treated in a hospital parking lot, some under an emergency tent. Elsewhere in Cianjur, residents huddled together on mats in open fields or in tents while buildings around them had been reduced to rubble.

Ambulance were still arriving at the hospital late into the night, bringing more people to the hospital.

Officials were still working to determine the full extent of the damage caused by the quake, which struck at a relatively shallow depth of 10 km, according to the weather and geophysics agency (BMKG).

Vani, who was being treated at Cianjur main hospital, told MetroTV that the walls of her house collapsed during an aftershock.

“The walls and wardrobe just fell … Everything was flattened, I don’t even know the whereabouts of my mother and father,” she said.

Ridwan said 88 aftershocks were recorded while weather agency BMKG warned of more landslides in the event of heavy rain.

Cucu, 48, was searching for one of her seven children.

“The children were downstairs and I was upstairs getting laundry. Everything collapse beneath me… One of my kids is still missing,” she said.

In Jakarta, some people left offices in the central business district, while others reported buildings shaking and furniture moving, Reuters witnesses said.

In 2004, a 9.1 magnitude quake off Sumatra island in northern Indonesia triggered a tsunami that struck 14 countries, killing 226,000 people along the Indian Ocean coastline, more than half of them in Indonesia. 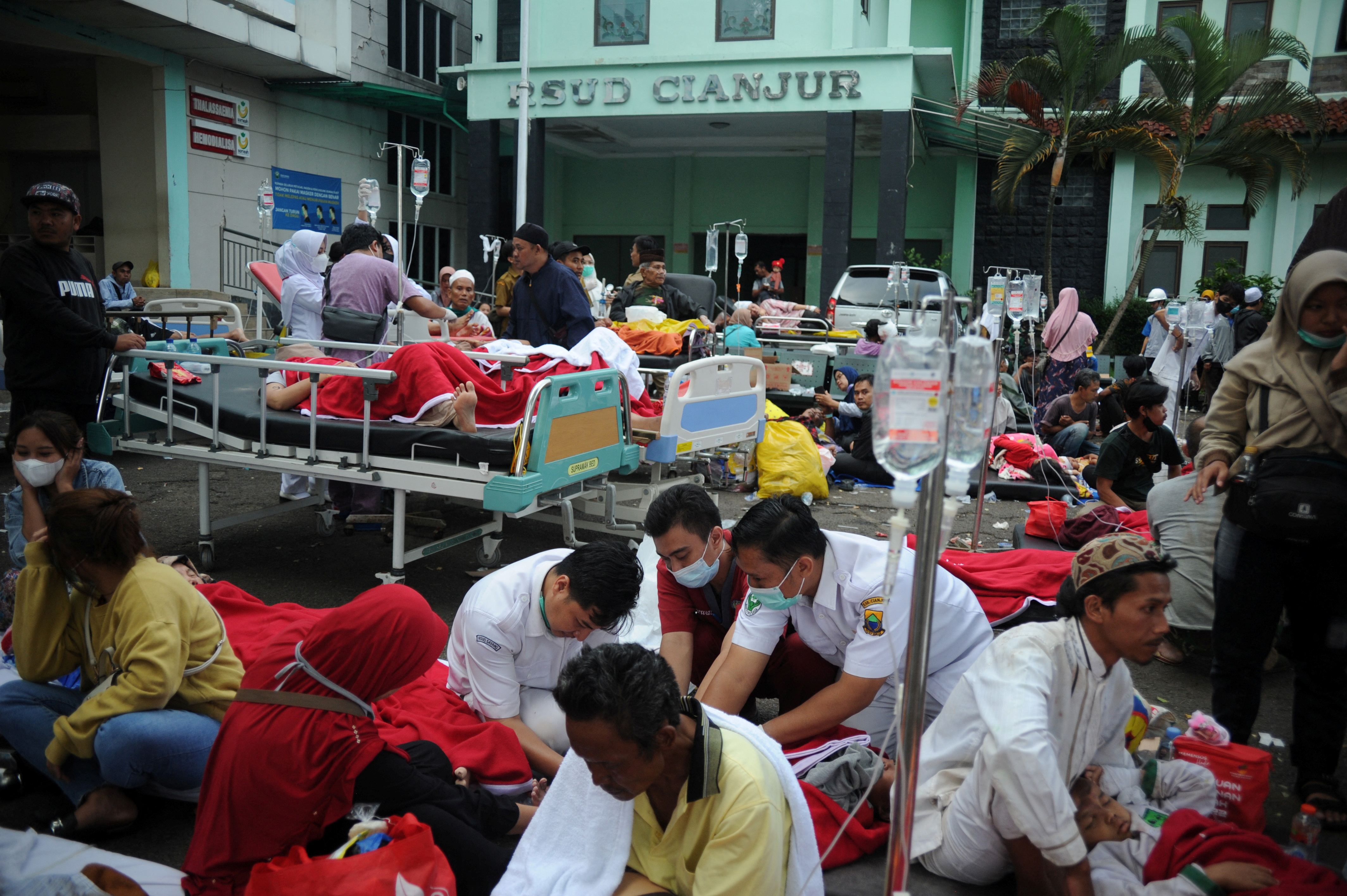 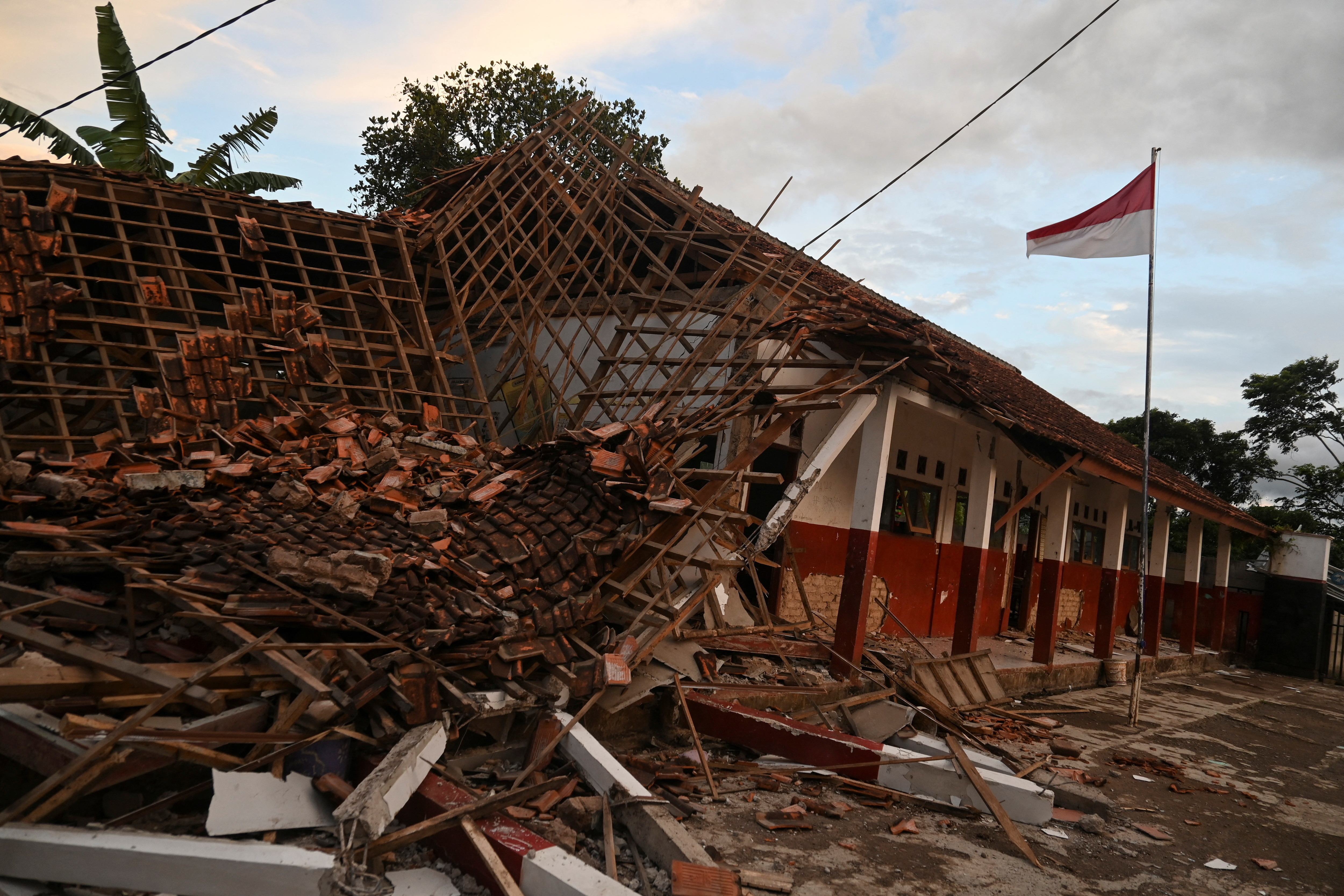 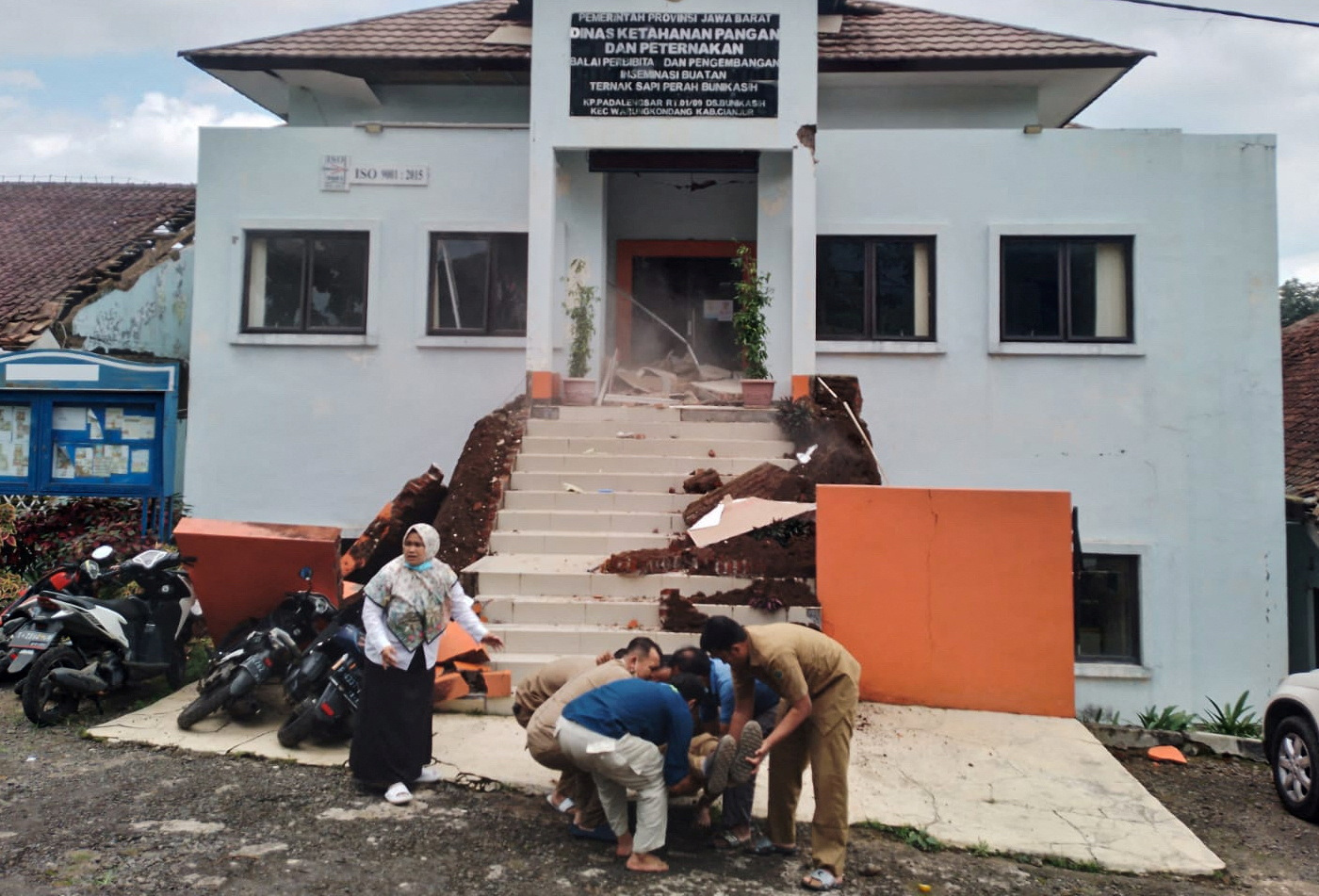 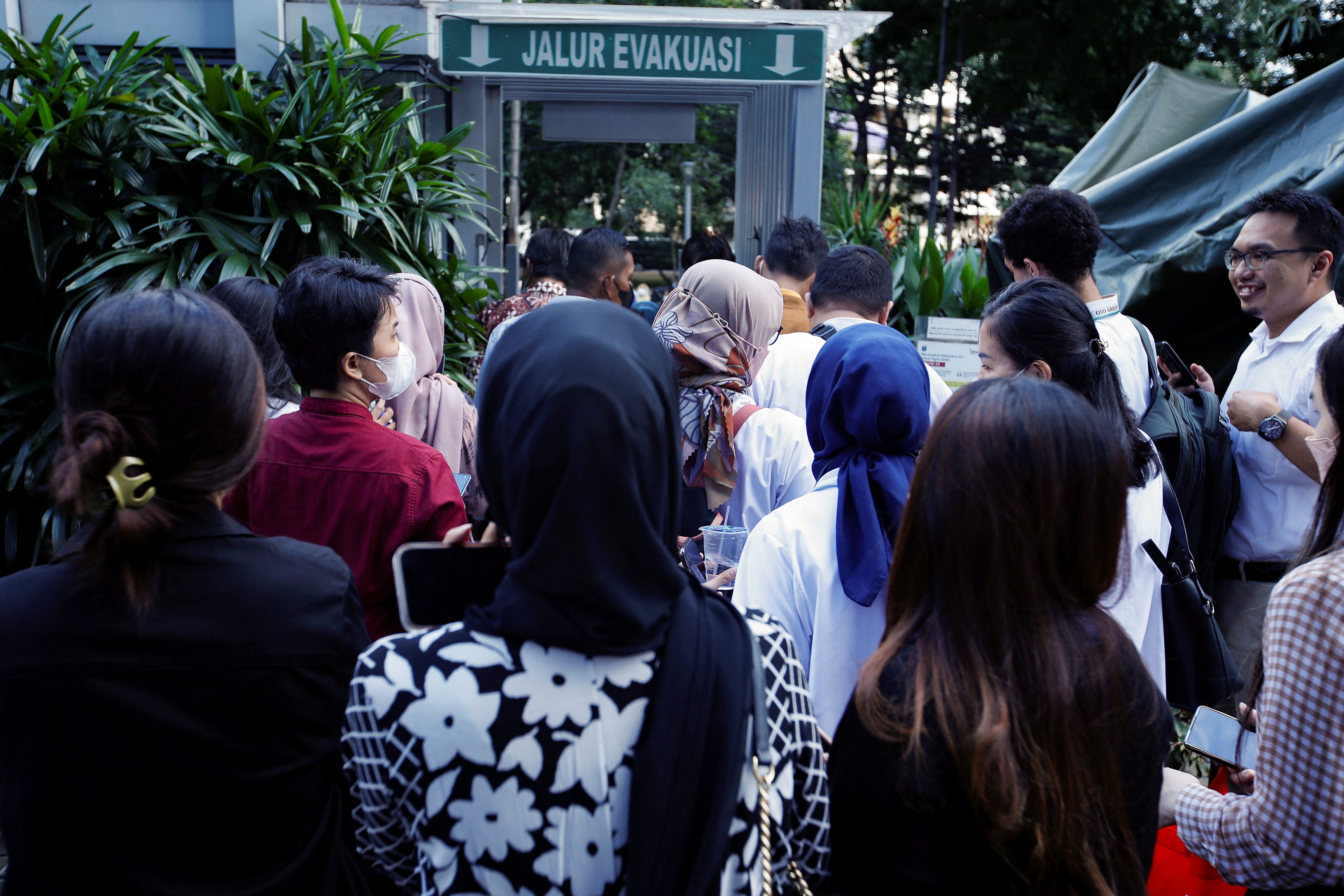 People gather as they are evacuated outside a building following an earthquake in Jakarta, Indonesia, November 21, 2022. REUTERS/Ajeng Dinar Ulfiana 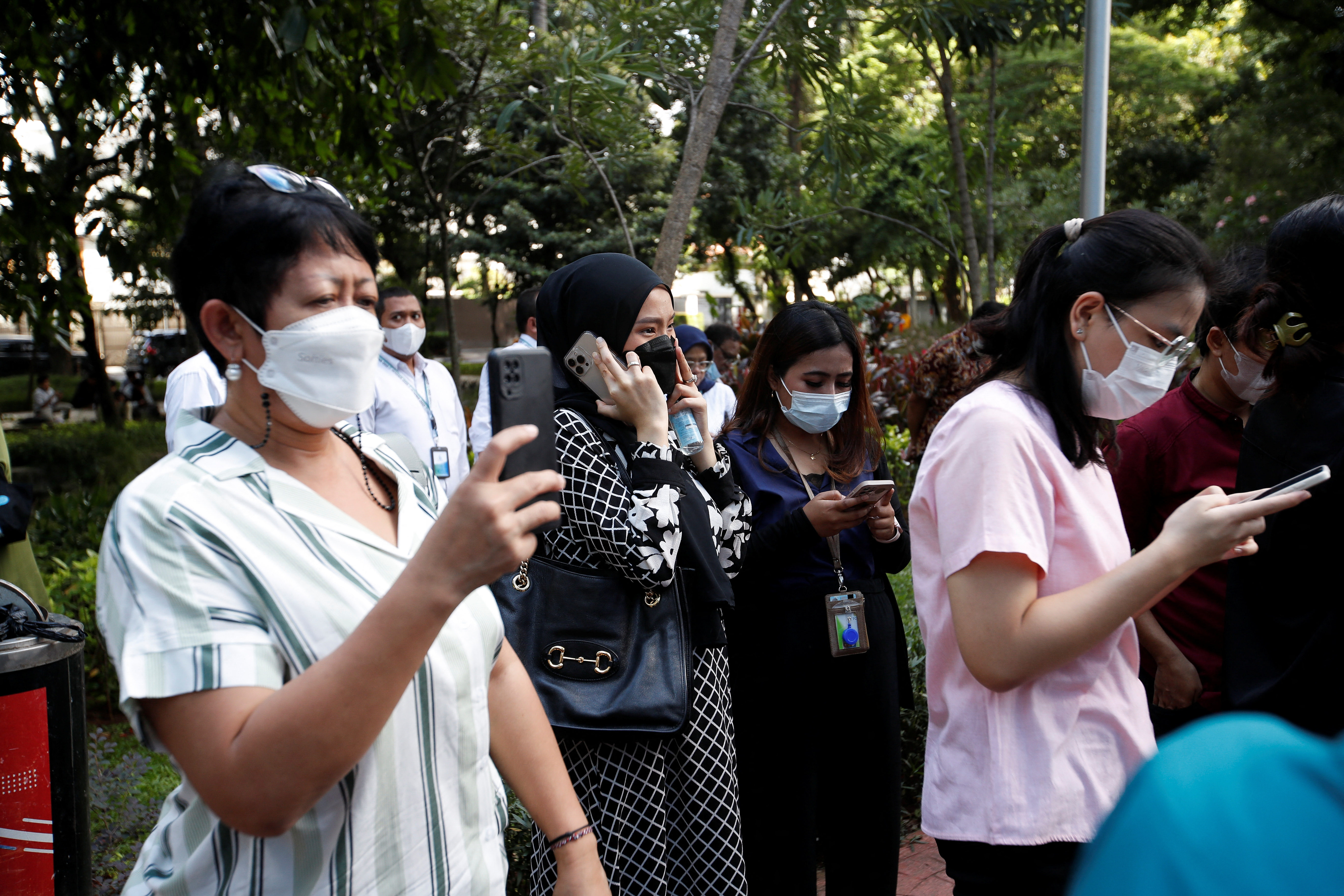