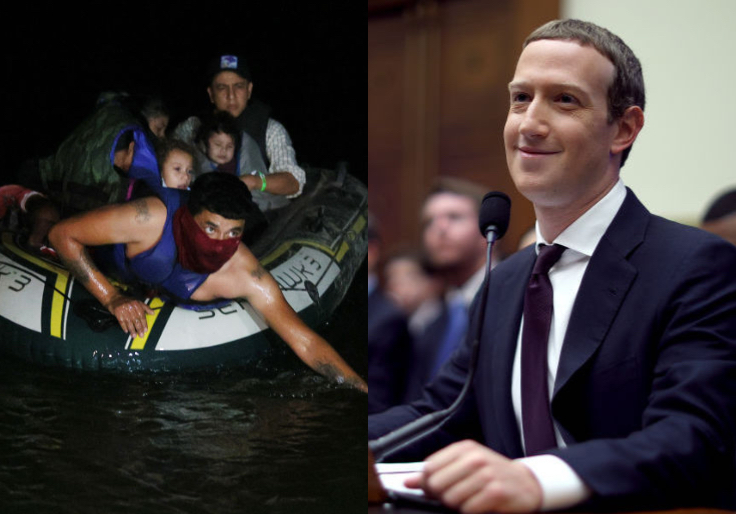 The world’s largest social media companies are facing pressure from Republican lawmakers to “take immediate steps to stop facilitating illegal immigration” as cartels use their platforms to recruit drivers for human smuggling schemes.

In a Thursday letter to Meta CEO Mark Zuckerberg, Republican senators Marsha Blackburn (Tenn.), Thom Tillis (N.C.), and Steve Daines (Mont.) accused the company of failing to curtail the solicitation of those smuggling schemes on its platforms, which include Facebook, Instagram, and WhatsApp. Cartel smugglers often use those sites, the Wall Street Journal reported last month, to anonymously post advertisements promising thousands of dollars to Americans in border states if they complete a short driving job, which really consists of picking up illegal migrants who have just crossed into the United States. For Blackburn, Tillis, and Daines, Meta should be able to shut down those posts, which they say have “led to a devastating amount of drug and human trafficking and other forms of violent crime.”

“Although your company has developed—and long enjoyed the benefits of—incredibly complex algorithms and other technology to keep users addicted, you claim to be unable to curb these illegal immigration schemes,” the letter, which the Washington Free Beacon obtained exclusively, states. “You have the ability to address this problem, and it is critical that you take immediate steps to stop facilitating illegal immigration on your platform.”

Meta responded to the Journal‘s report by saying it “prohibits the facilitation of human smuggling and invests in technology and works with law enforcement to address the issue.” In late January, however, the company privately announced it would allow users to solicit human smugglers on its platforms, the Free Beacon reported. In an internal memo detailing the decision, Meta stressed the need to allow people to use Facebook and its other platforms to “seek safety or exercise their human rights,” a move it acknowledged comes with “tradeoffs” such as scrutiny from “law enforcement and government bodies.”

Meta is not the only social media giant that has a cartel problem. TikTok—whose CEO received a similar letter from Blackburn, Tillis, and Daines—has been flooded with cartel recruitment posts, which promise fast cash and lavish parties for those who drive for the criminal organizations. “Cartels are trying to get workers. … [They] show lots of money, they show lots of drinking, partying, and everything else,” Commander Jorge Esparza of the Brooks County Sheriff Department told the Free Beacon in May. “It’s like a joke on law enforcement,” Sgt. Aaron Moreno of the Hidalgo County Sheriff’s Department added. “I’ve seen TikTok videos where there’s coyotes in a vehicle and they have a long rifle.”

Beyond Meta and TikTok, Blackburn, Tillis, and Daines also sent letters to executives at Snapchat and Twitter. The letters include a deadline of December 16 for the companies to answer an array of questions, including the volume of smuggling posts on their platforms, whether they use “algorithms and artificial intelligence” to identify and remove those posts, and how they “coordinate with law enforcement to help them identify people involved in smuggling groups.” None of the companies returned requests for comment.

Illegal immigration has exploded under President Joe Biden. Customs and Border Protection encountered more than two million migrants at the southern border in the last fiscal year alone, the first time that figure has been reached in American history. Still, White House press secretary Karine Jean-Pierre assured reporters in September that the Biden administration has “taken unprecedented action over the past year and a half to secure our border.”