A former top FBI counterintelligence official has been indicted on charges that he conspired to violate U.S. sanctions by taking secret payments from a Russian oligarch he investigated, the Justice Department announced on Monday.

Charles McGonigal, who headed the FBI’s counterintelligence division in New York from 2016 to 2018, was allegedly paid by aluminum magnate Oleg Deripaska to investigate a rival Russian oligarch, according to the DOJ. Prosecutors also claim Deripaska paid McGonigal through an intermediary for his efforts to take him off the U.S. sanctions list. In a separate indictment from the U.S. Attorney’s office in D.C. unsealed Monday, McGonigal was also charged with taking $225,000 in cash payments from a former employee of a foreign intelligence service while he was still at the FBI.

McGonigal, 54, was reportedly arrested at John F. Kennedy International Airport in New York on Jan. 21 as he returned from a trip to Sri Lanka. The serious charges against a former FBI senior official, especially a counterintelligence official with access to sensitive information, for taking money from several foreign interests, are exceedingly rare.

McGonigal allegedly collaborated with Sergey Shestakov, a Russian interpreter who previously served as a Soviet and Russian diplomat, who is also charged in the first indictment. The two men allegedly attempted to cover their ties to Deripaska, who has ties to Russian President Vladimir Putin and was sanctioned by the U.S. Treasury Department in 2018, by using shell companies to send and receive payments from him. The two men also used a forged signature on the contract for their services and took care not to name Deripaska in electronic communications, instead referring to him as “you-know-whom,” “our friend from Vienna,” and “the big guy,” according to prosecutors.

A lawyer for McGonigal did not respond to TIME’s request for comment.

In the indictment, prosecutors note that McGonigal was aware that his actions were violating U.S. sanctions “because, among other reasons, while serving as FBI Special Agent in Charge, McGonigal received then-classified information” that Deripaska would be added to the sanctions list.

Read More: A Kremlin-Linked Firm Invested Millions in Kentucky. Were They After More Than Money?

McGonigal, who had served in the FBI since 1996, focused on Russian counter-intelligence during his time at the agency. As head of the FBI’s counterintelligence division in New York, he “supervised and participated in investigations of Russian oligarchs,” including Deripaska, according to the indictment.

Authorities claim that while McGonigal was in that role in 2018, Shestakov introduced him via email to an agent of Deripaska only identified as “Agent-1,” a fellow former Soviet and Russian diplomat “rumored in public media reports to be a Russian intelligence officer.” McGonigal allegedly agreed to help the daughter of Deripaska’s agent get an internship with the New York Police Department “in the fields of counterterrorism, intelligence gathering and “international liasoning,” according to the indictment. “I have interest in her father for a number of reasons,” he told a contact at the department, according to the indictment. 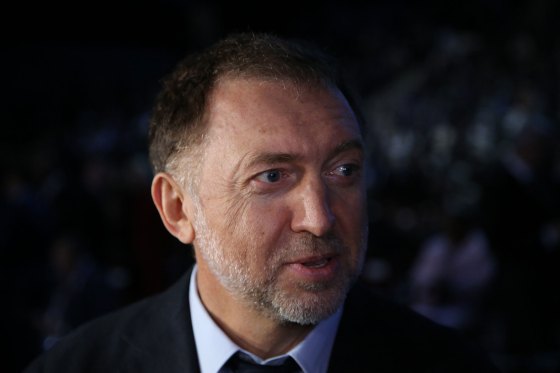 After leaving the FBI later that year, McGonigal listed his job as an executive at real estate management company Brookfield Properties, according to LinkedIn. At the same time, he traveled to meet Deripaska in Vienna and London. He was paid at least $25,000 as an “investigator” as he and Shestakov worked through a law firm representing Deripaska in an unsuccessful effort to get the Russian billionaire off the U.S. sanctions list.

In 2021, they began to work for the Russian oligarch directly. Their contract stated an initial fee of $51,000 and then $41,790 per month, which they were paid from August to November 2021. McGonigal told a friend he was doing “legitimate work” for a “rich Russian guy,” according to the indictment. That same year, Deripaska—who was under sanctions by the Treasury Department for his ties to the Russian state conducting “malign activities”—was having his homes in New York and Washington searched by McGonigal’s former agency. (Deripaska himself was indicted last September for conspiring to violate sanctions imposed by the U.S.)

McGonigal’s and Shestakov’s work for Deripaska—and the payments—were abruptly interrupted when the FBI executed a search warrant in November 2021, and special agents seized their electronic devices. In addition to charges for violating U.S. sanctions, McGonigal and Shestakov both face money laundering charges. Each count carries a maximum sentence of 20 years in prison.

“Russian oligarchs like Oleg Deripaska perform global malign influence on behalf of the Kremlin and are associated with acts of bribery, extortion, and violence,” FBI Assistant Director in Charge Michael Driscoll said in a statement. “The FBI is committed to the enforcement of economic sanctions designed to protect the United States and our allies… There are no exceptions for anyone, including a former FBI official like Mr. McGonigal.”

Read More: How Putin’s Oligarchs Got Inside the Trump Team

The U.S. Attorney’s Office in Washington, D.C. also unsealed a separate case against McGonigal on Monday on charges he received $225,000 in cash while he was at the FBI from an individual who he knew had been employed by a foreign intelligence service.

“Covering up your contacts with foreign nationals and hiding your personal financial relationships is a gateway to corruption,” U.S. Attorney for the District of Columbia Matthew M. Graves said Monday.

McGonigal traveled abroad with the unnamed individual, who is identified as a former Albanian intelligence employee working in Europe, met with foreign nationals, and engaged “in other conduct in his official capacity as an FBI Special Agent in Charge that he believed would benefit the businessperson financially,” according to prosecutors. He did not disclose this to the FBI.

“Mr. McGonigal betrayed his solemn oath to the United States in exchange for personal gain and at the expense of our national security,” FBI Assistant Director in Charge Alway said in a statement. “A senior FBI executive at the time, McGonigal is alleged to have committed the very violations he swore to investigate while he purported to lead a workforce of FBI employees who spend their careers protecting secrets and holding foreign adversaries accountable.”