Listen to this article
2023-01-23T11:34:47Z
Italian mafia boss Matteo Messina Denaro is being in a high-security jail in central Italy, subject to special restrictions applied to the country’s most dangerous prisoners. 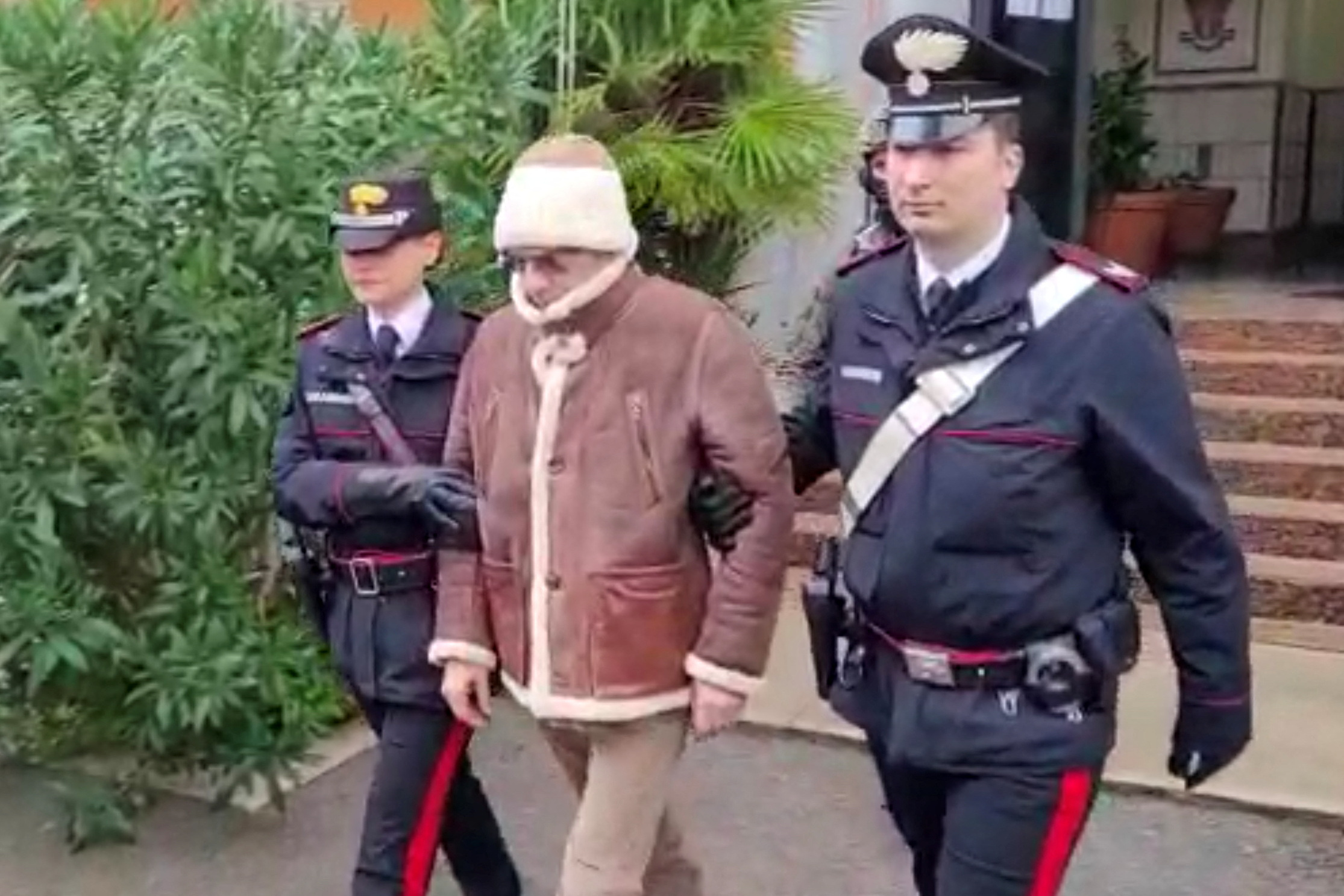 A screengrab taken from a video shows Matteo Messina Denaro the country’s most wanted mafia boss being escorted out of a Carabinieri police station after he was arrested in Palermo, Italy, January 16, 2023. Carabinieri/Handout via REUTERS

Matteo Messina Denaro, a brutal Sicilian Mafia boss who was Italy’s most wanted criminal before his capture last week, had been on the run for 30 years. Here are some key facts about his arrest and what it means:

Messina Denaro, 60, was the last runaway member of a generation of mobsters who masterminded a string of bombings and murders that terrorised Italy in the early 1990s.

His arrest finally brings closure to that dark era, shatters a symbol of resistance to the Italian state and could reveal Mafia secrets in the unlikely event that Messina Denaro agrees to talk to investigators.

He was involved in dozens of killings, including of top prosecutors Giovanni Falcone and Paolo Borsellino and the adolescent son of a Mafia turncoat whose body was dissolved in acid.

Nobody knows for sure, but there have long been suspicions that Messina Denaro had his back covered by politicians and other establishment connections. A retired prosecutor who chased him for years blames unspecified freemasonry circles.

“I have always believed a Masonic network protected him all over the world,” Teresa Principato told La Repubblica newspaper, saying she had found evidence that he spent time in Spain, Venezuela and Britain, as well as Sicily.

Crime writer Roberto Saviano has pointed out that a former junior justice minister, Antonio D’Ali, has been convicted for collusion with the Messina Denaro family. He served under former Prime Minister Silvio Berlusconi in 2001-2006.

Messina Denaro was eventually caught outside a clinic in Palermo after police discovered he was sick with cancer.

Experts describe Sicily’s Cosa Nostra, its fame amplified by movies such as “The Godfather”, as an ailing crime group facing several difficulties including competition in the highly lucrative drugs market.

“Messina Denaro was the last godfather, he represented all the secrets of Cosa Nostra. It is the end of a myth and the organisation will have to cope with this,” said Anna Sergi, an expert in organised crime at England’s Essex University.

Although Cosa Nostra retains control of its Sicilian bedrock and a capacity to infiltrate the broader economy, it has been supplanted in the drugs trade by the Calabrian ‘Ndrangheta.

Alfonso Sabella, a former anti-Mafia magistrate, said Cosa Nostra is now only Italy’s third-largest criminal group, behind the ‘Ndrangheta and the mob centred around the city of Foggia in the south-east.

Part of the reason, de Lucia explained, is that under Mafia tradition the so-called “boss of bosses” position is only for mobsters from the area around the Sicilian capital Palermo.

Previous supremos were Salvatore “Toto” Riina and Bernardo Provenzano, who spent decades on the run before their arrest. Both men died in prison, Riina in 2017 and Provenzano a year earlier.

The mobster was flown to a high-security prison in central Italy to be subjected to the tough “41 bis” regime under which prisoners are held alone in small cells, with video surveillance in operation at all times.

From prison, Messina Denaro will continue to receive cancer treatment and might be called to testify in other Mafia trials or talk to prosecutors, in the unlikely case he breaks Cosa Nostra’s “omerta,” or code of silence.