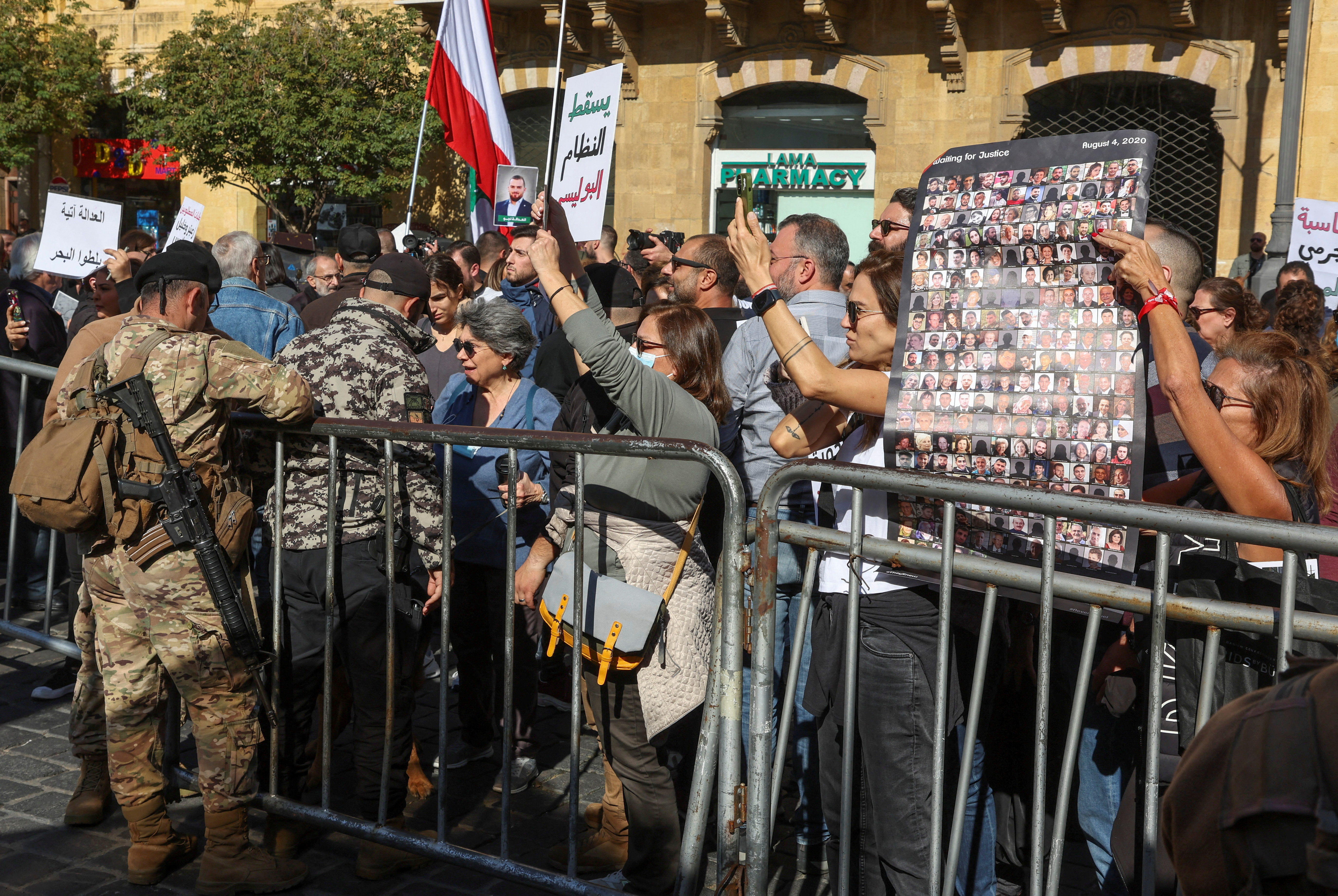 Families of the victims of the 2020 Beirut port explosion gather during a protest near the parliament building, in Beirut, Lebanon January 19, 2023. REUTERS/Mohamed Azakir/File Photo

Lebanon’s top public prosecutor on Wednesday charged the judge investigating the 2020 Beirut port explosion that killed at least 220 people, stymieing his effort to hold members of the ruling elite accountable.

Public prosecutor Ghassan Oweidat, who rejected Judge Tarek Bitar‘s decision to resume the inquiry, also ordered the release of people detained in connection with the blast.

Here is a recap of how the blast happened and the obstacles that have stalled the investigation.

The blast is thought to have originated from a blaze that tore through a warehouse just after 6 p.m. (1600 GMT) on August 4, 2020, detonating hundreds of tonnes of ammonium nitrate.

Originally bound for Mozambique aboard a Russian-leased ship, the chemicals had been at the port since 2013, when they were unloaded during an unscheduled stop to take on extra cargo.

The ship never left the port as no one claimed the shipment which was tangled in a legal dispute over unpaid port fees and ship defects.

The amount of ammonium nitrate that blew up was one fifth of the 2,754 tonnes unloaded in 2013, the FBI concluded, adding to suspicions that much of the cargo had gone missing.

The blast was so powerful it was felt 250 km (155 miles) away in Cyprus and sent a mushroom cloud over Beirut.

Many Lebanese officials, including President Michel Aoun and then-Prime Minister Hassan Diab, were aware of the cargo.

Aoun said after the blast he had told security chiefs to “do what is necessary” after learning of the chemicals. Diab has said his conscience is clear.

Human Rights Watch said in a report last year that high-level security and government officials “foresaw the significant threat to life … and tacitly accepted the risk of deaths occurring”.

Lebanon’s ruling elite has major sway over the judiciary, with many judges owing their appointments to politicians.

The justice minister appointed Judge Fadi Sawan as investigator shortly after the blast. Sawan charged three ex-ministers and Diab with negligence over the blast in December 2020, but then hit strong political pushback.

A court removed him from the case in February 2021 after two of the ex-ministers – Ali Hassan Khalil and Ghazi Zeitar – complained he had overstepped his powers.

Appointed to replace Sawan, Bitar sought to interrogate senior figures including Khalil and Zeitar, who are both members of Parliament Speaker Nabih Berri’s Amal Movement and allies of the Iran-backed Hezbollah.

The probe hit complete limbo in 2022 when some judges retired before ruling on complaints against Bitar that were halting his investigation. The authorities held off appointing new judges, raising concern the probe would be indefinitely frozen.

Bitar resumed his probe this week on the basis of a legal opinion, charging officials including top security official Major General Abbas Ibrahim.

Bitar has not pursued any members of the heavily armed, Iran-backed Hezbollah group. But Hezbollah campaigned fiercely against him as he sought to question its allies.

In 2021, a Hezbollah official warned Bitar the group would “uproot” him, and its supporters marched in an anti-Bitar protest that prompted deadly violence in Beirut.

Hezbollah has accused the United States of meddling in the probe. The U.S. ambassador has denied this.

Hezbollah dismissed accusations after the blast that it had stored arms at the port and says it had nothing to do with the blast. Its adversaries have long accused the group of controlling the port – something it also denies.