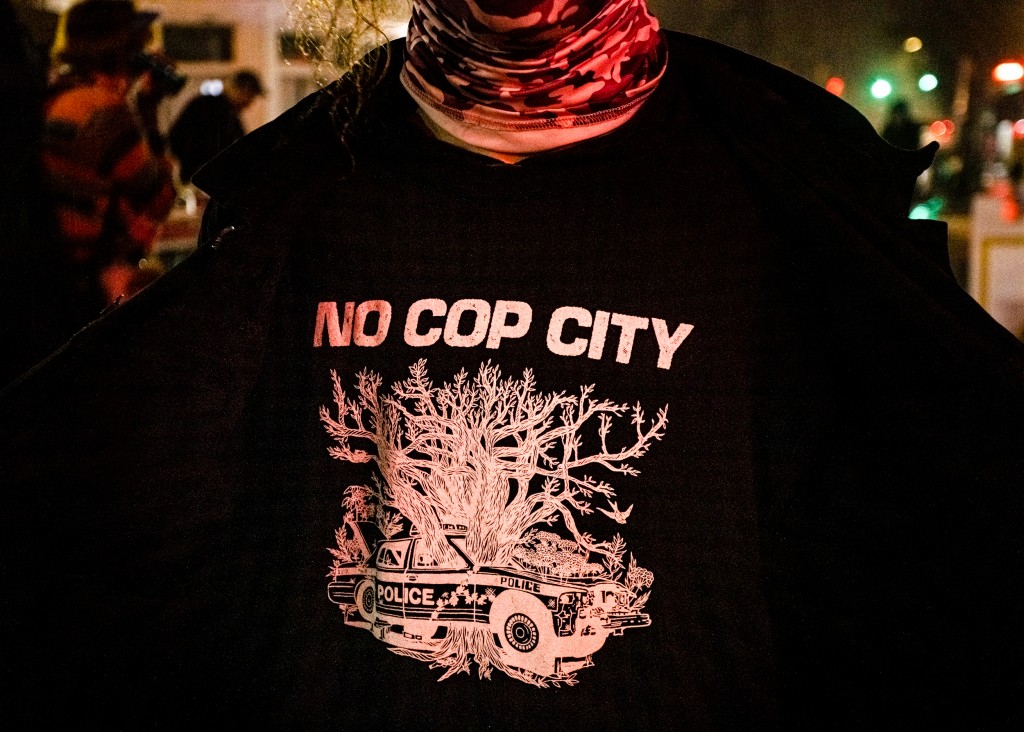 A protester wears a shirt that says “No Cop City” during a candlelight vigil for an eco-activist who was shot and killed in an incident near the site of a proposed Atlanta law enforcement training center on Jan. 18, 2023, in Atlanta, Ga.


A death is a beacon. After police killed an activist protesting a police training facility in Atlanta on Wednesday, vigils sprung up instantly across the country, from Massachusetts to Miami.

“This will become another Standing Rock,” said Casey Sharp, an archaeologist who has been helping bridge communications between protesters and local leaders. “There are a lot of locals who are there … but there’s a massive network — Telegram channels, Signal, all these other networks of people from all over the world.”

Cop City, the colloquial term for the proposed $90 million, 85-acre police training center in forested land just outside of Atlanta, might have been a local issue two years ago. Over the last few months, activists from around the country have traveled to Atlanta to inhabit the land — called Intrenchment Creek Park, South River Forest, or Weelaunee Forest, depending on who you’re talking to — and to face off against police in an increasingly strident confrontation.

Some of that became evident on Saturday night, when vandals split off from a march down Peachtree Street after reaching the headquarters of the Atlanta Police Foundation to break windows. A police cruiser was set aflame, and the storefronts of Wells Fargo and Truist bank branches — firms financially supporting the foundation — were smashed in before police were able to make arrests and break up the march.

In the run-up to the Saturday night protests, state patrol officers made a dozen arrests on charges ranging from criminal trespass to aggravated assault and domestic terrorism. All but one were from out of state — California, Maine, Maryland, Nebraska, New York, Ohio, Pennsylvania, and Wisconsin.

The same was true of the six people the police managed to tackle in the street on Saturday night. All six of the arrestees were white. Five were from out of state. Other activists were quick to say that there may have been other arrests tied to the protests that the police aren’t publicizing.

One does not have to be a police abolitionist to raise questions about the propriety of Cop City.

Police have suggested that out-of-state activists are causing most of the trouble. “Many of them don’t live in Atlanta, or the state of Georgia, and they don’t represent the voices of Atlanta,” said Atlanta Mayor Andre Dickens at an evening press conference.  “We will continue to protect the right to peacefully protest. We will not tolerate violence or property destruction.”

“We should be listening to the local residents of DeKalb County, bringing community and environmental leaders to the table to work out an enforceable solution,” said Doug Williams, a resident of Atlanta’s East Lake neighborhood and political activist. “The problem with the police training center and the Atlanta forest is a classic Atlanta issue. Those in power did what they wanted without a lot of concern for what local residents wanted. This is the Atlanta way.”

Sometimes, it takes a finely tuned ear to distinguish authentic public sentiment from a well-crafted public relations campaign. Not here. The city council approved the plan by a 10-4 vote only after 17 hours of public comment, almost all of which was in opposition. Among those voting in favor: then-city councilman Dickens. Amid a generational rise in violent crime in Atlanta and Buckhead signaling open revolt, the Atlanta Police Foundation made it clear in an election year that it would attack any politician who voted against it.

A new training facility for Atlanta police had been long discussed before the announcement in 2020. But the timing of that announcement could not have been worse. Amid street protests about police misconduct that had left the public’s relationship with the police in tatters, the Atlanta Police Foundation announced a plan to build a facility on public land earmarked for a public park. While the public-private partnership to build the project relied on millions from Atlanta’s corporate funders, it required about $30 million more from the city budget.

The plan met a firestorm of environmentalism and equity concerns from two overlapping groups: environmental activists and policing abolitionists. Opponents argued that the land was environmentally sensitive and that the phase one environmental review was perfunctory by design. Intrenchment Creek Park is on the site of a former prison farm, where the graves of prisoners might be found. Protesters descended on the wooded site almost immediately, staking out tents and interfering with site development. The activism of “forest defenders” and enforcement by state and local police has been increasing in a cycle of escalation for the last few months.

The deal also relies on a controversial land swap with film production studio Shadowbox, formerly named Blackhall Studios. Ryan Millsap, the studio CEO, signed a deal to swap his 53 acres of land for 40 acres of Intrenchment Creek Park in 2020 on an understanding that he would pour $1.5 million into a new park and amenities. A year later, he sold the studio to a private equity firm in Los Angeles that is under no obligation to keep Millsap’s promises to DeKalb County. Private entities like the studio and the Atlanta Police Foundation stand to profit from the construction of the facility — the revenues from its use flow to the foundation, not the city.

When asked about their position on the training facility since the shooting, foundation communications staff directed an email seeking comment to the Atlanta police, suggesting that the police department speaks in part for the nonprofit organization. The foundation has historically resisted meaningful inquiry by journalists. Notably, the Atlanta Journal-Constitution has had to run a disclaimer under its reporting about the training facility because the project’s funding is led by a Cox Communications executive. They’re not subject to open records requests, hold their meetings in private, and generally refer inquiries to the police, as they did with me.

“Atlanta residents and unincorporated DeKalb residents who thought this was all going to be park land were told, ‘This is what we’re doing, accept it.’”

The land itself is in a legally curious gray zone. Because it’s in unincorporated DeKalb County and not the city limits, a project would normally need the approval of the DeKalb County government. But because it’s municipally owned, state law allows the project to sidestep some elements of local approval. The site’s neighbors have neither legal nor political recourse.

“Atlanta residents and unincorporated DeKalb residents who thought this was all going to be park land were told, ‘This is what we’re doing, accept it,’” Williams said. “Everyone who opposed the training center for any reason was lumped together as ‘anti-cop.’ Now there is no trust, and in this vacuum we are seeing this become a nationalized issue for those who oppose the militarization of police, and those who want to paint democratic communities as being anti-police.”

The shooting of Tortuguita, a nonbinary person who went by that sole name, shocked activists, who say Tortuguita had been a vocal proponent of nonviolence. A Georgia Bureau of Investigation spokesperson said Tortuguita refused orders to leave a tent and shot a state trooper. Other law enforcement officers returned fire, killing them, the GBI said.

It took police the better part of a day to recover a gun from the scene. No body-worn cameras captured the event, the GBI’s Nelly Miles said. “Although we have bodycam footage from the day of the operation, we do not have bodycam footage of the shooting incident. The law enforcement officers wearing bodycam were not close enough to the shooting itself to capture it.” Calls for an independent investigation are growing.

It has also shocked area politicians, who are now forced to confront the politics of this project head-on.

Anyone who can call off Cop City is in a tough political position. If the project is now delayed, police officers may react as they did when two were charged with murder following the Rayshard Brooks killing in 2020 and call a “blue flu” walkout. Violent crime continues to rise incrementally in Atlanta, and it is an issue that a demagogue could use to change the political direction of the city. Atlanta’s middle class is mostly Black and tends to be politically moderate on matters of crime, at odds with the progressive activist base. But they vote. They are why Dickens is mayor.

But if it continues, any serious act of police misconduct in the future may drive activists into the street in a replay of 2020. Law enforcement agencies across metro Atlanta have been setting records for increases in police shootings and deaths in custody. Atlanta’s police averaged two fatal shootings a year before the pandemic. They had seven last year. The most remarkable thing may be how little outrage those shootings provoked, but that may not be a forbearance Atlanta’s leaders enjoy moving forward.

That’s especially true if Cop City becomes the new cause equivalent to the Keystone XL pipeline, expanding into an activist Lollapalooza. As the number of strident demonstrators for police accountability — or abolition — relocate to south DeKalb County, public tolerance for misconduct will diminish and the likelihood of conflict will increase.