Chinese authorities imposed more restrictions on Wednesday to rein in a rapid rise in COVID-19 infections, adding to investors’ worries about the economy just as fresh unrest at the world’s largest iPhone factory highlighted the social and financial toll of these curbs.

Across China, cities including the capital Beijing and financial hub Shanghai have closed malls and parks, and imposed limits on the movement of people arriving from elsewhere as infections neared record highs last seen in April.

The measures are darkening the outlook for the world’s second-largest economy and dampening hopes that China would significantly ease its outlier coronavirus policy any time soon.

“While there is little prospect of the authorities opting to step back from the zero-COVID policy during the winter, there is a significant risk that containment efforts fail,” analysts at Capital Economics wrote in a note. Such a failure could result in more lockdowns which would cause unprecedented damage to the economy, the analysts added.

China’s COVID curbs, the tightest in the world, have fuelled discontent across the country and affected production at several manufacturers including Taiwan’s Foxconn (2317.TW), Apple Inc’s biggest iPhone supplier.

On Wednesday, scenes broadcast live on social media showed people describing themselves as Foxconn workers pulling down barriers and fighting with authorities in hazmat suits, chanting “give us our pay”. The unrest follows weeks of turmoil which has seen scores of employees leave the factory over COVID controls.

Even though infection numbers are low by global standards, China has stuck with its zero-COVID approach, a signature policy of President Xi Jinping that officials argue saves lives and prevents the medical system from being overwhelmed. As of Tuesday, there were 28,883 new domestically transmitted cases, official data showed.

Residents are increasingly getting fed up with nearly three years of restrictions, and Wednesday’s protest at the Foxconn factory in Zhengzhou comes weeks after now deleted social media images showed crowds crashing through barriers and clashing with hazmat-suit-clad workers in the southern city of Guangzhou.

The rising case numbers are also testing China’s resolve to avoid one-size-fits-all measures such as mass lockdowns to curb outbreaks, and rely on recently tweaked COVID rules instead.

However, unofficial lockdowns have increased, including in residential buildings and compounds in Beijing, where case numbers hit a new high on Tuesday. Officials there have shut malls, parks and museums, and urged residents of certain neighbourhoods not to leave, turning the usually bustling capital into a ghost town.

In Shanghai, a city of 25 million that was locked down for two months earlier this year, China’s top auto association said on Wednesday it would cancel the second day of the China Automotive Overseas Development Summit being held there over COVID concerns.

Authorities there also announced fresh restrictions on arrivals, while Chengdu, with 428 cases on Tuesday, became the latest city to announce mass testing.

Major manufacturing hubs Chongqing and Guangzhou have seen persistently high infection numbers for days, accounting for most of China’s caseload. Cases in Guangzhou fell slightly on Tuesday to 7,970 and authorities have said infections continue to be concentrated in key areas of Haizhu district.

Investors who last week were hopeful that China would ease restrictions soon have now grown worried that the latest wave of infections could slow the economic reopening. read more Many analysts say a significant reopening is unlikely before March or April.

“The next few weeks could be the worst in China since the early weeks of the pandemic both for the economy and the healthcare system,” said analysts at Capital Economics. 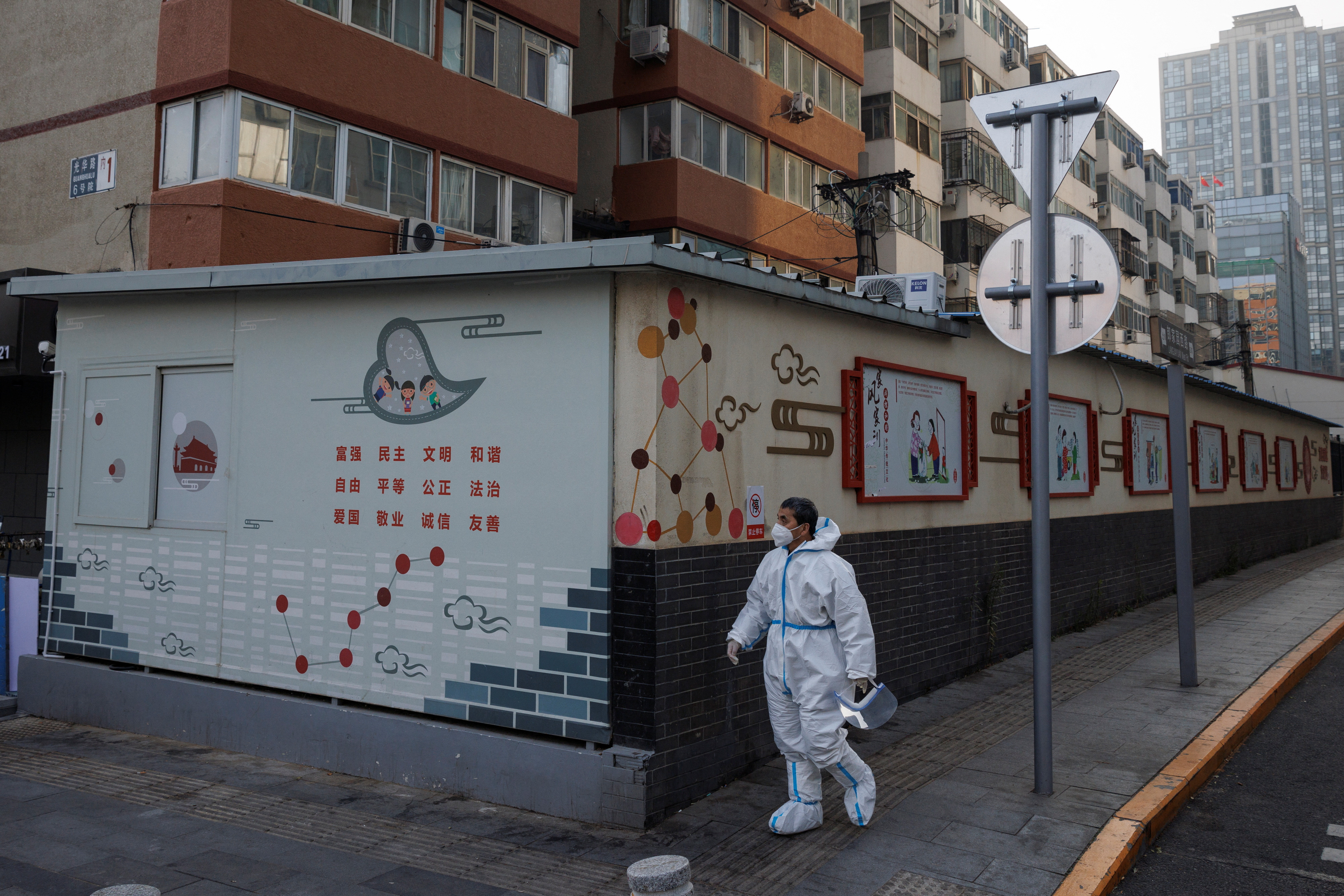 An epidemic prevention worker in a protective suit walks in a street as outbreaks of the coronavirus disease (COVID-19) continue in Beijing, China, November 23, 2022. REUTERS/Thomas Peter 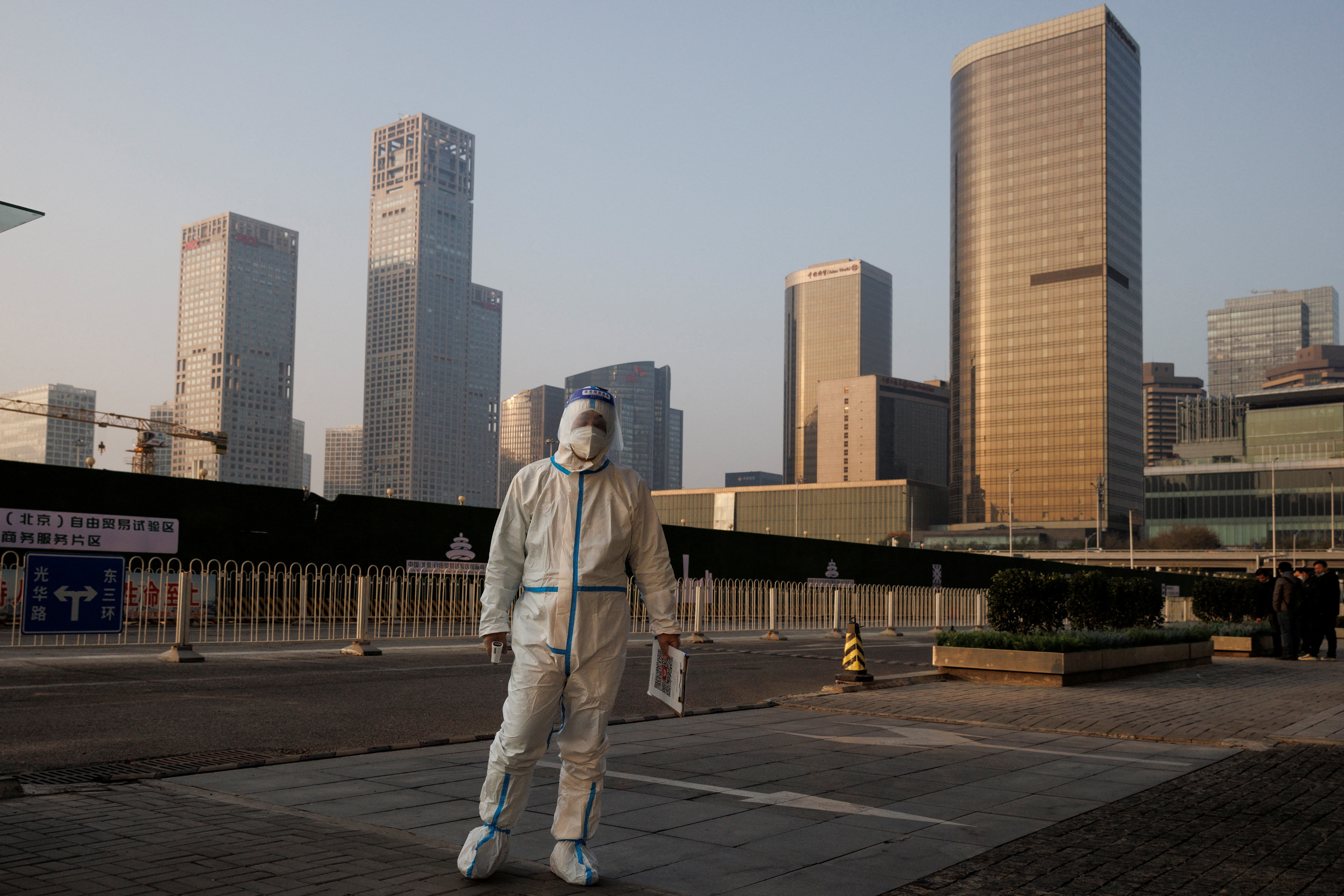 An epidemic prevention worker in a protective suit guards the entrance to an office building in the Central Business District (CBD) as outbreaks of the coronavirus disease (COVID-19) continue in Beijing, China, November 23, 2022. REUTERS/Thomas Peter 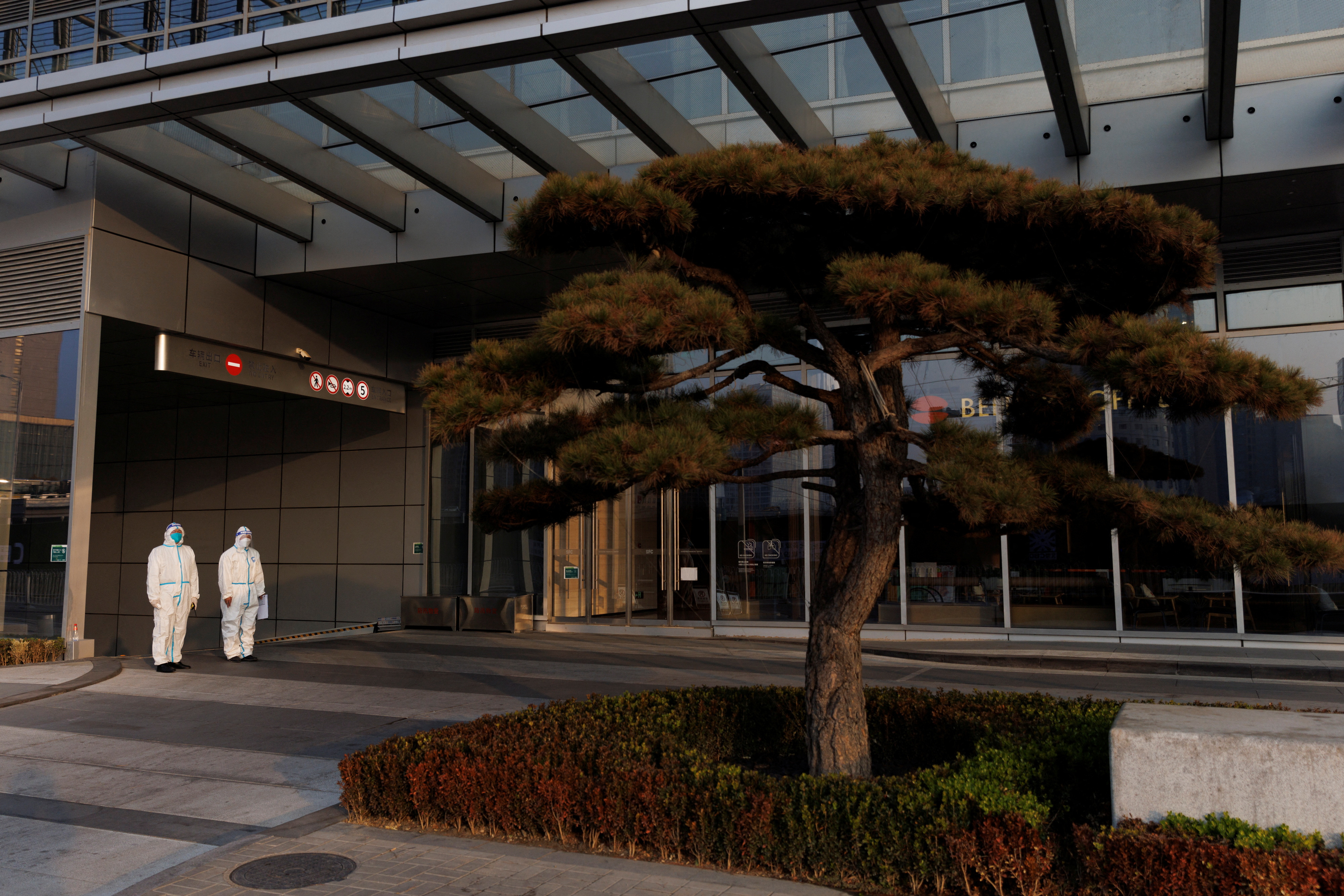 Epidemic prevention workers in protective suits guard the entrance to an office building in the Central Business District (CBD) as outbreaks of the coronavirus disease (COVID-19) continue in Beijing, China, November 23, 2022. REUTERS/Thomas Peter 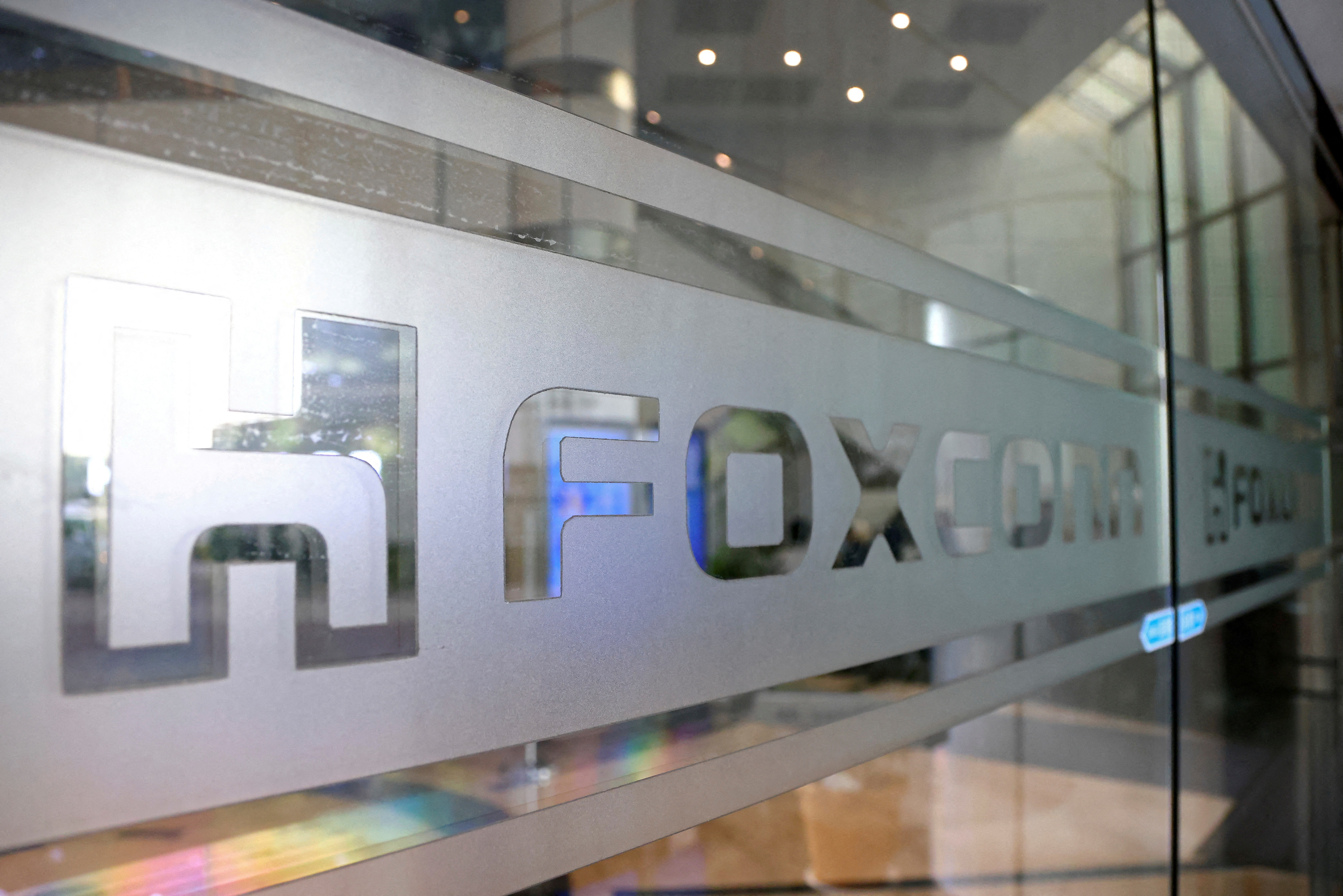 The Foxconn logo is seen on a glass door at its office building in Taipei, Taiwan November 12, 2020. REUTERS/Ann Wang/File Photo 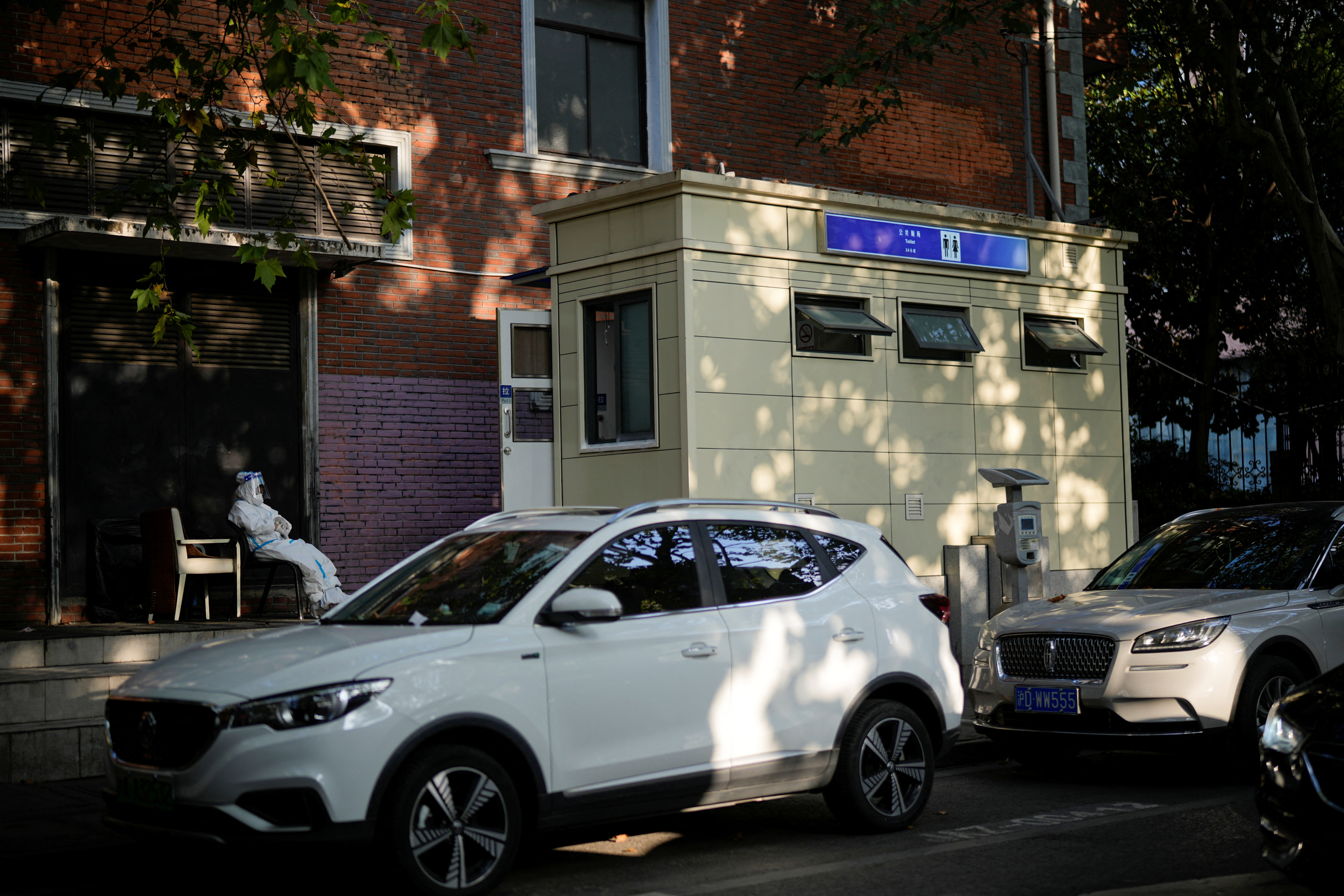 A worker in protective suit keeps a watch outside a public toilet to inspect the health code of visitors, amid the coronavirus disease (COVID-19) outbreak in Shanghai, China, November 21, 2022. REUTERS/Aly Song
Advertisements
Advertisements