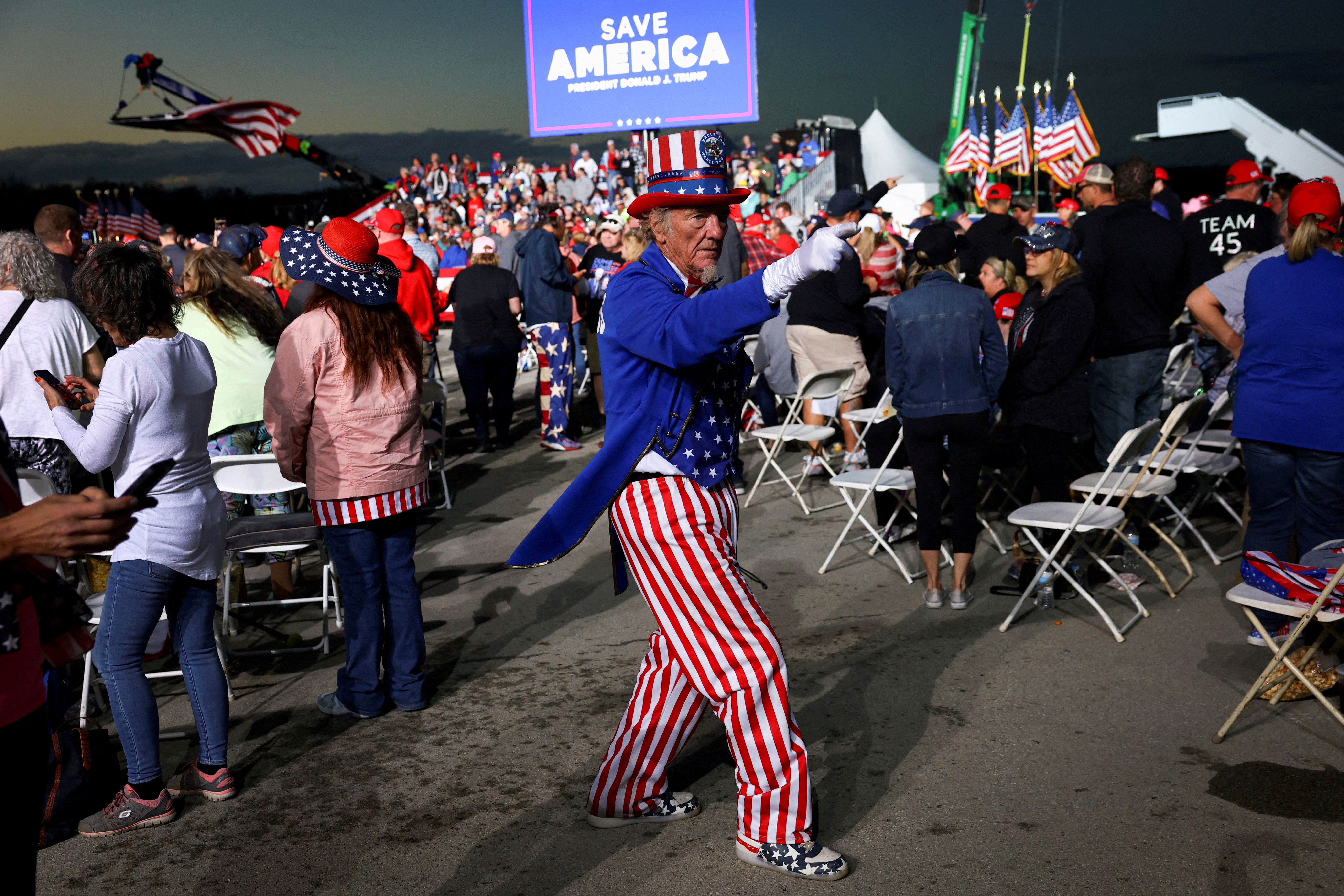 Tensions bubbled to the surface at the first major gathering of possible Republican 2024 presidential candidates this weekend as party members voiced a desire to move on from Donald Trump, though even his detractors wondered if that would be possible.

Fresh off a disappointing performance in midterm elections that saw them win a smaller-than-expected majority in the U.S. House of Representatives and fail to take control of the Senate, Republicans worried aloud about the former president’s prospects.

“If Donald Trump is the face of the Republican Party, it’s always going to cost us a couple of (percentage) points,” said Eric Levine, an attorney and Republican fundraiser from New York.

“Donald Trump is the only Republican that would lose” in 2024, he said.

The last week had made it clear that the defeated former president was likely to remain in the spotlight in the months ahead.

Trump launched a fresh campaign for the Republican nomination on Tuesday, before the final midterm votes have even been tallied. On Friday, Attorney General Merrick Garland named a special counsel to lead the federal investigations into Trump’s attempts to overturn his 2020 election defeat and removal of classified documents from the White House.

And Saturday, Twitter owner Elon Musk gave Trump back access to the social media account that helped power his rise to the presidency and served as his main cudgel to bludgeon opponents.

Many in the crowd were clearly enthused: Even though Trump was the only candidate to address the crowd by video, his speech was marked by several standing ovations in the crowded hotel ballroom.

“We have to stay strong and we have to fight and frankly, you better hope a certain person wins the election in 2024,” Trump said to cheers.

The man who could pose the largest threat to Trump, DeSantis, also received a fervent response as the final featured speaker on Saturday night.

“We have a lot more to do, and I have only begun to fight,” DeSantis told the crowd without elaborating on his future plans.

He talked up his resounding re-election win earlier this month, where he beat his Democratic opponent by almost 20 points, arguing he can pull in nontraditional Republican voters.

But DeSantis made no mention of Trump. Pence likewise treaded carefully, boasting about the accomplishments of their administration and avoiding direct criticism of his former boss.

Others, including former New Jersey Governor Chris Christie, were more disparaging of the one-term president.

Trump’s false claims that the 2020 election was fraudulent had “diminished” the party, he said.

Maryland Governor Larry Hogan, another potential presidential candidate, said a “course correction” was needed, while Mike Pompeo, who served as Trump’s secretary of state, took a jab at Trump, a former reality TV star, when he said, “personalities and celebrity just aren’t going to get it done.”

Haley implored the party to elect a new generation of leaders and said she was seriously considering a run.

“We’re behind the times and we have to be honest with ourselves,” Haley said.

The Republican Jewish Coalition has been a force in the party’s politics largely through the efforts of the late Sheldon Adelson, the casino magnate who donated hundreds of millions of dollars to Republican candidates and causes until his death in 2021.

His widow, Miriam Adelson, has said she will remain neutral in the Republican presidential primary but will ultimately support the nominee, according to a source familiar with her stance.

While the majority of Jewish Americans support Democrats, the Republican Party has continued to increase its share of the national Jewish vote in recent years.

Many Trump supporters attribute that trend in part to his move to recognize Jerusalem as Israel’s capital, and the brokering of a series of accords between Israel and Arab states, among other policy steps by his administration.

The executive director of the coalition, Matthew Brooks, said he was not surprised that Trump, who was a last-minute addition to the program, was already taking fire from others with their eyes on the White House.

“The fact that it’s happening now is a manifestation of how early this election is getting started,” Brooks said.

Ari Fleischer, the former press secretary under President George W. Bush and a member of the coalition’s board, said he did not expect a “coronation” for Trump, who lost to President Joe Biden in 2020 by more than 7 million votes.

“Maybe he’ll earn it and deserve it. Maybe somebody new will come along,” Fleischer said. “Let the primary begin.”

Some attendees were openly skeptical Trump could win the nomination. “It’s not going to happen,” said New Hampshire Governor Chris Sununu. “He’s at his weakest point now, and it ain’t getting better.”

In an Edison Research exit poll conducted on Election Day, six of 10 respondents said they had an unfavorable opinion of Trump.

Another donor, David Blumberg, a South Florida resident and venture capitalist, said a different nominee than Trump could draw back independent and some disaffected Republicans voters who gravitated toward Democrats in the midterms.

“I would like a president who has the same policies (as Trump),” Blumberg said. “I would like somebody though who is a little more restrained on the campaign trail and in picking fights we don’t need to pick.”

Fleischer noted, however, that party elites have not proven able to constrain Trump, who remains popular with “the blue-collar workers, the people who wouldn’t be caught dead at an event like this,” he said, adding, “That’s the base of Donald Trump’s strength.”