Elections officials who had braced for death threats and unrest ahead of the midterms said extensive preparations assured a mostly peaceful and orderly vote even in fiercely contested battlegrounds – inspiring some confidence about conducting a smooth 2024 presidential contest.

In Pennsylvania, Nevada, Arizona and Georgia, officials took a variety of measures to secure the voting process. Some said they moved ballot-processing operations to safer locations; some deployed additional police; others adopted measures to speed counting and to respond to election misinformation in real time to defuse potential threats.

The officials often introduced the changes after staff were subjected to threats and harassment, most of them based on election conspiracy theories promoted by former President Donald Trump and his allies.

After the vote, officials in these battleground states said the relatively smooth midterms were a step towards preparing for the presidential contest in 2024 – but that they still faced challenges.

Although prominent election deniers in critical battleground states lost at the polls, their movement has had far-reaching impact. In last week’s midterms so far, 14 election deniers were elected governor, attorney general or secretary of state in 10 states, according to States United Action, a nonpartisan watchdog group.

As a former president, Trump’s outbursts when the candidates he backed lost carried less weight than they did in the 2020 elections when he excoriated officials in several states as he tried to overturn his loss.

Even so, officials said they changed the way they held elections to better prepare for potential unrest.

“Election administration used to be pretty much like wedding planning,” said Philadelphia’s Democratic Commissioner Lisa Deeley, who faced threats from Trump supporters after the 2020 election. “Now, you’re either a superhero or a supervillain.”

Philadelphia moved its ballot processing operations from the downtown convention center to a warehouse 15 miles (24 km) away that sits along a busy road, making it less accessible to the public, and set up a “First Amendment Zone” on a grassy area outside the building for protesters. None showed up.

On Election Day, police guarded the parking lot and patrolled inside the building. Metal detectors were set up at the entrance to the ballot processing area. Cameras monitored movements in the warehouse as workers sorted and scanned ballots.

Inside the counting center, officials moved to speed up the count, raising payments to temporary election workers to help recruit enough staff, according to interviews with the city’s three election commissioners.

The commissioners said they moved swiftly to counter conspiracy theories. When Twitter users falsely miscaptioned a video of an election inspector in Wisconsin marking ballots as required by state law as an election worker “rigging” ballots in Philadelphia, Republican commissioner Seth Bluestein drove to a polling station and posted videos from the location to show that it was not the same place.

“I personally visited the East Passyunk Community Center polling place today,” he tweeted. “This is another example of dangerous misinformation.”

By midnight on Election Day, Bluestein had already been up for 20 hours. “Elections are intense,” he said. “It definitely takes a lot out of you.”

Some commissioners adopted contingency plans for their personal security.

Democratic Commissioner Omar Sabir said he and his wife developed a plan for the safety of their seven young children, including code words and a designated location where the family would meet in the event of an emergency.

In 2020, he spent several days at a hotel after receiving threats.

Trump-backed candidates who were defeated in Pennsylvania’s midterms didn’t challenge the results. A concession from Oz the morning after the election and Mastriano’s concession a week later helped to ease tensions, the officials said.

Still, Sabir said in an interview, the anxiety lingers “every time I walk out the door.”

Other battleground jurisdictions altered how they run elections.

In Nevada’s Washoe County, which includes Reno and is the second-most populous in the state, election administrators doubled the number of live-streaming cameras in the ballot-processing room to four, produced informational material on the vote-counting process and installed a glass spectator booth for observers to watch votes being tallied.

“I’m hoping that by pulling back the curtain a little bit – showing people what we do, how we do it, why we do it – that it will help people understand things,” Jamie Rodriguez, the interim registrar of voters, said in an interview.

She joined the office in the spring after her predecessor took a leave of absence due to death threats and harassment.

Still, Rodriguez’s office faced a crisis as votes were being counted in the tight Nevada Senate race when live-stream cameras in the ballot-counting room suddenly went dark.

Social media users accused the county of shutting down the cameras to rig ballots for Democrats. In reality, the livestream app suffered a glitch that caused the cameras to stop working, county officials said in a statement after investigating the blackout.

The area had remained locked and security cameras had filmed all entrances to the room, they added. Rodriguez said her staff checked employee badges to make sure no one had slipped in during the pre-dawn hours.

Even as she explained what happened, protesters demonstrated outside the election building. They waved miniature American flags and signs that read, “Stop stealing our elections.”

Rodriguez said she wasn’t rattled by the commotion and believed by addressing the skeptics, eventually tempers would cool.

“People are very upset and we need to make sure that we get them as much information as possible,” she said.

And a few hours into Election Day, Maricopa County Recorder Stephen Richer told reporters that about 20% of electronic vote tabulation machines in the state’s most populous county were malfunctioning. Officials later said some printers lacked toner “strong enough” to produce adequate marks on ballots, which meant some tabulators couldn’t read them.

In a video released on social media on Thursday, Lake said she was “exploring every avenue to correct the many wrongs that have been done this past week.” A day earlier, she said malfunctions in Maricopa amounted to voter disenfranchisement. Officials, however, say alternative measures ensured voters could cast ballots.

In 2020, a voting-systems technician in the county received death threats after social media users falsely accused him of stealing votes.

“It used to be they were only here during the voting, now we keep them around to make sure the staff feels safe at the end of the night,” Manifold said. “Everyone has been more proactive than ever before making sure we are prepared from a security standpoint.” 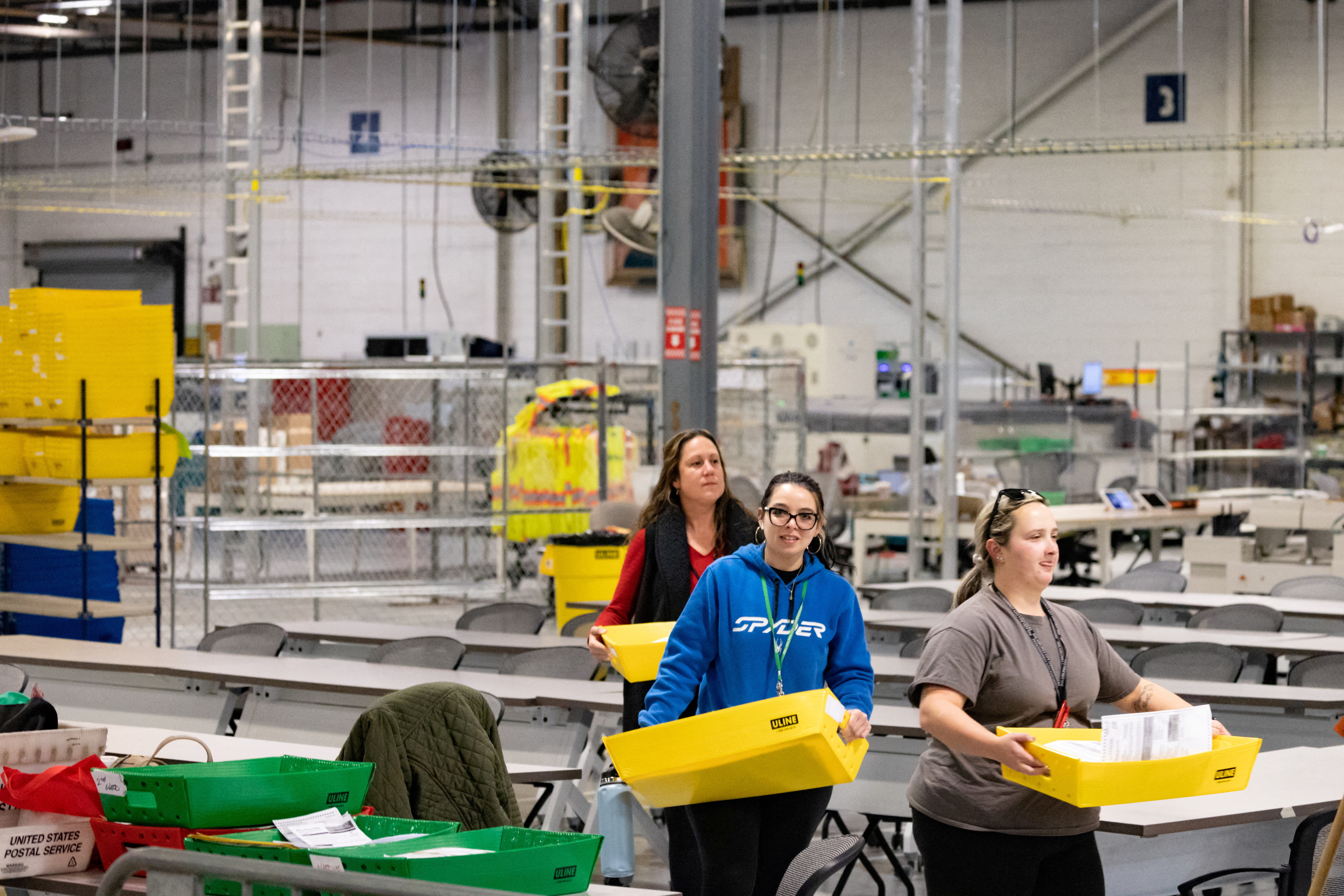 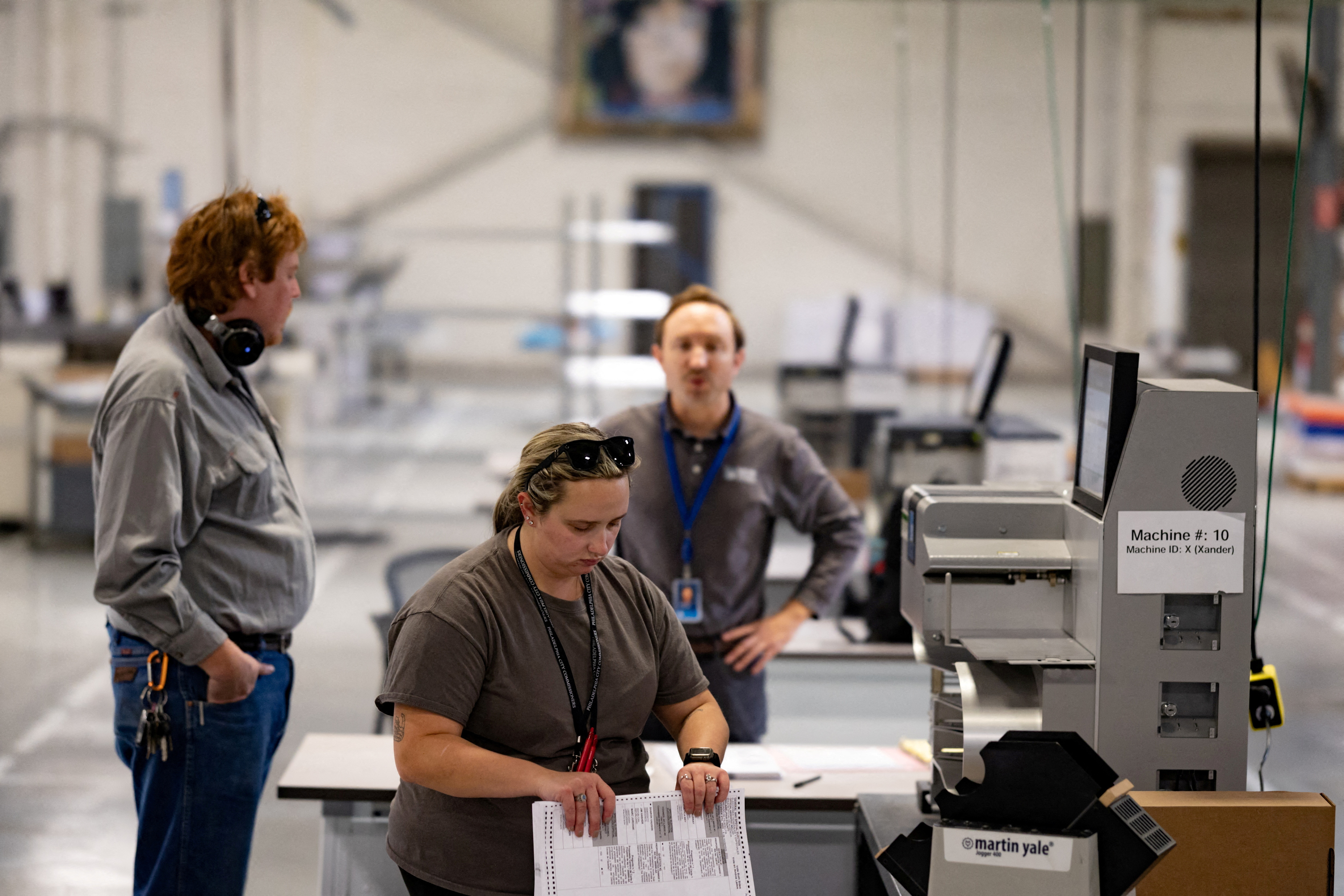