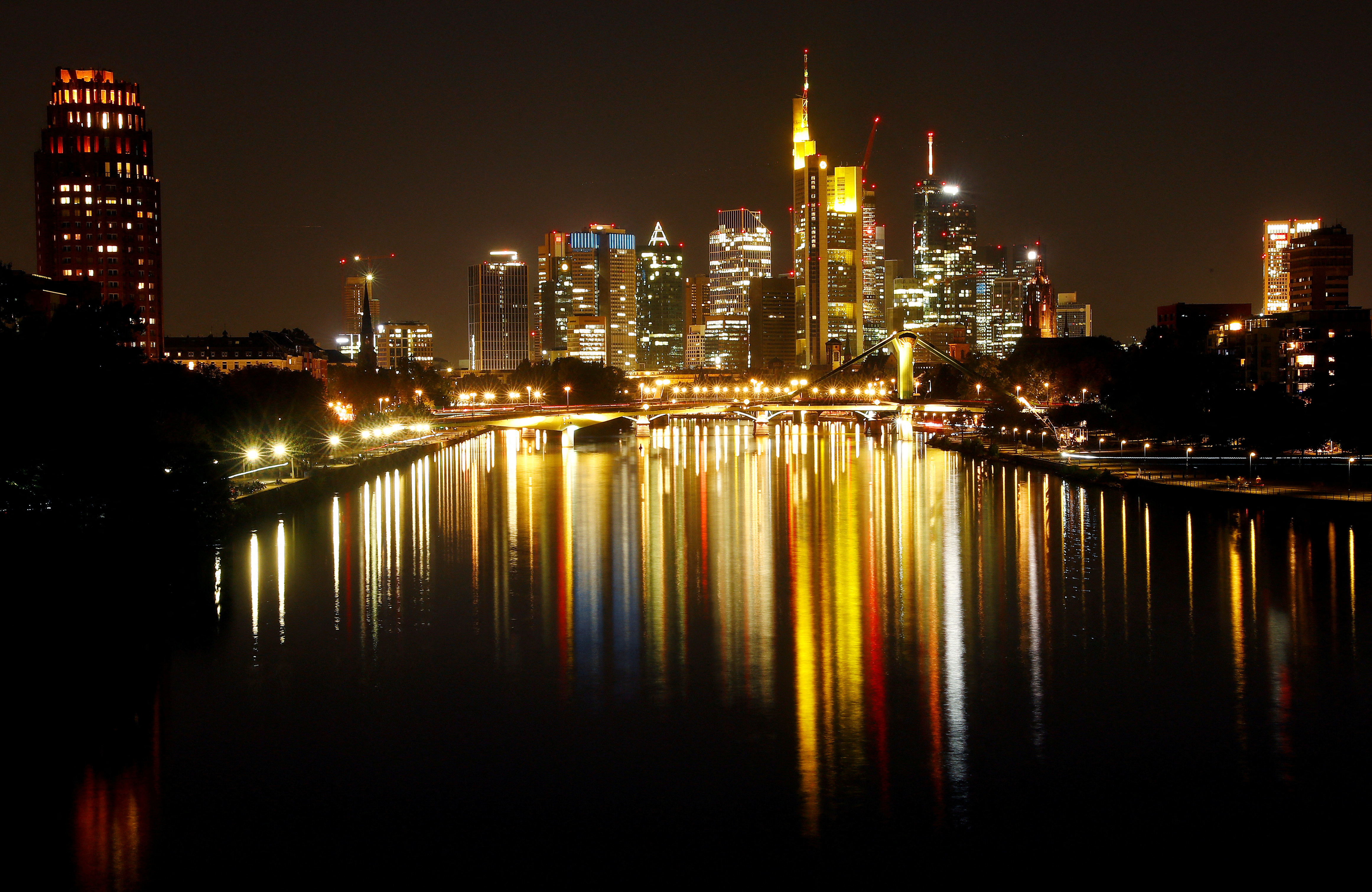 The skyline with its financial district is photographed on early evening in Frankfurt, Germany, September 18, 2018. REUTERS/Kai Pfaffenbach/File Photo

A European recession looked like a no-brainer just a few weeks ago, but that picture has changed dramatically, and investors have started pouring money into the region’s stocks, currency and bonds.

JPMorgan has raised its forecast for euro zone first-quarter economic growth to 1% from a contraction of 0.5%, echoing a similar move from Goldman Sachs earlier this month.

Data from BofA Global Research on Friday showed the first weekly inflow of investor money into European equity funds in almost a year.

Markets are picking up those positive vibes. The euro is set for its largest three-month gain against the dollar since 2011, having risen nearly 10%.

European stocks have vastly outperformed their U.S. peers. The euro STOXX (.STOXXE) benchmark has beaten its U.S. peer, the S&P 500 (.SPX), by over 18 percentage points since September. Morgan Stanley says this is its best outperformance in 20 years relative to Wall Street.

“It’s a very big move in European gas prices and that has dramatically improved the outlook. The perception has shifted from the worst kind of contraction, especially for countries like Germany, to potentially avoiding recession,” said Samy Chaar, chief economist at Lombard Odier in Geneva.

“It’s difficult to see a negative. Whether it’s investment-grade bonds, or equities, or the euro, it’s all very good news”.

Dutch natural gas futures , a regional benchmark, have fallen back to where they were before Russia invaded Ukraine and are down 80% from their August peak.

Investors are allocating cash back to European equities and cutting exposure to Wall Street, where pricey tech stocks are getting hammered by rising rates.

In terms of valuations, European blue-chips are trading at a multiple of around 13, compared with a ratio of around 20 for the S&P 500, according to Refinitiv data. That 7-point premium is well above the five-year average of 1.5, suggesting that European shares look cheap compared to the U.S.

That said, not everyone is upbeat.

BofA European equity strategists, for example are “positioned against (the) consensus view”, as they feel recent monetary tightening, the harshest in four decades, will lead to a recession, which will drag down stocks.

Even self-declared bulls are cautious.

Banca Ifigest’s Lottici said the “sword of Damocles” of the war in Ukraine still dangles over Europe.

“Lower gas prices are surely a positive, but their rapid fall also tell us that they can rise just as fast should things go wrong. I’m managing my assets very carefully,” he said.

The euro has stormed 15% higher against the dollar from September’s 20-year low of $0.9528 and some analysts think it has much further to go.

“Europe is recovering in a big way,” Nomura FX strategist Jordan Rochester said. His bank expects the euro to reach $1.10 by the end of January and $1.16 by year-end.

The improvement in the European economy is also driving flows into fixed income. Richard McGuire, head of rates strategy at Rabobank, said while the impact of lower energy prices on government bonds “has many moving parts… when you put them together, we would argue that it’s bullish.”

On the one hand, he said lower inflation and less need for debt issuance to fund energy subsidies is positive for bonds, but this has to be weighed against higher growth, which tends to hurt traditional safe-haven.

European peripheral debt has particularly benefited. The Italian 10-year yield , the benchmark for non core euro zone issuers, has fallen by 87 basis points year-to-date, outpacing a 49 bps fall for the German equivalent and 44 bps for the U.S. Yields move inversely to prices.

Corporate credit has also got a lift. A closely watched index of European corporate credit (.MERER00) has seen its yield fall nearly 50 basis points this year.

“We’ve been definitely increasing our weighting to credit, we did most of that in October and November,” said David Zahn, head of European fixed income at Franklin Templeton.

“The credit markets in Europe were pricing in a recession, and when you think a recession is going to be fairly mild, you want to buy that”.