Sen. Chuck Grassley is calling for more information about the FBI’s raid on a former agency contractor who had given a watchdog documents claiming that federal officials failed to investigate possible criminal activity related to former Secretary of State Hillary Clinton, the Clinton Foundation, and the sale of Canadian mining company Uranium One to a Russian company’s subsidiary.

Grassley, R-Iowa, has sent a letter to FBI Director Christopher Wray and to the Department of Justice’s internal watchdog, seeking more details on the raid of Dennis Nathan Cain in Maryland on Nov. 16, giving them until Dec. 12 to respond, reports Fox News.

Cain’s attorney, Michael Socarras, told The Daily Caller after 16 FBI agents raided the home on Nov. 19 that the agent who led the raid accused Cain of being in possession of stolen federal property.

Cain claims he that he has been recognized as a protected whistleblower under federal law by DOJ watchdog Michael Horowitz. Socarras also said Horowitz sent Cain’s information to the House and Senate intelligence committees.

Grassley, in his letter to Wray, asked why Cain’s house was raided, if the FBI knew of his disclosures to Horowitz, and if the disclosures were considered protected. Further, he asked if agents seized any classified information. 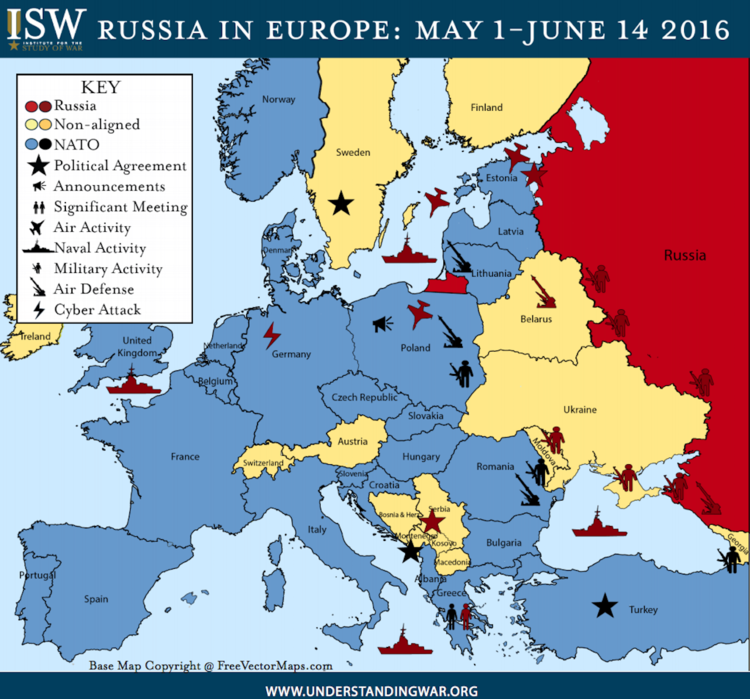 Foreign Policy–15 hours ago
After a meeting of senior U.S., Canadian, and European diplomats at NATO in Brussels on Tuesday, Pompeo accused Russia of being in …
US, NATO give Russia 60 days to comply with nuclear pact
<a href=”http://NBCNews.com” rel=”nofollow”>NBCNews.com</a>–15 hours ago
Russia in ‘material breach’ of nuclear arms treaty: NATO statement
Reuters–19 hours ago
US signals it will suspend nuclear treaty with Russia after NATO finding
CBC.ca–17 hours ago
US, NATO give Russia ‘last chance’ to save INF Treaty
International–TASS–16 hours ago
The Latest: Russia says it ‘strictly complies’ with treaty
In-Depth–Washington Post–19 hours ago
View all

Express.co.uk–Dec 4, 2018
“Ukraine is not a NATO member but we strongly support Ukraine’s sovereignty and territorial integrity. “We also call on Russia to release the …
NATO set to meet over Ukraine-Russia crisis
United News of India–3 hours ago
View all
The Guardian

North Atlantic Council statement on developments near the Sea of Azov

Irish Times–18 hours ago
Nato has accused Russia of seeking to establish total control over the … control the Sea of Azov,” Nato’ssecretary-general Jens Stoltenberg …

US Sets Deadline for Russia, Warns It May Quit Nuclear Pact

U.S. News & World Report–15 hours ago
The U.S. has shared intelligence evidence with its NATO allies that Russia’s new SSC-8 ground-fired cruise missile could give Moscow the …

MOSCOW: Moscow on Wednesday dismissed US claims it is violating a major Cold War treaty limiting mid-range nuclear arms, as a senior general lashed out at Washington’s attempts to “contain”

The tense rhetoric comes a day after Secretary of State

said Washington would withdraw from the treaty within 60 days if Russia does not dismantle missiles that the US claims breach the deal.

Zakharova said “no proof has been produced to support this American position” on the Intermediate Range Nuclear Forces (INF) treaty, which she described as a cornerstone of global security.

Kremlin spokesman Dmitry Peskov said facts had been distorted “in order to camouflage the true goal of the US withdrawing from the treaty”.

sparked global concern by declaring the United States would pull out of the deal and build up America’s nuclear stockpile “until people come to their senses”.

But on Monday, the US leader said he wants talks with his Chinese and Russian counterparts Xi Jinping and

“to head off a major and uncontrollable arms race”.

Meanwhile, the Russian Army Chief of Staff Vasily Gerasimov said Wednesday that Moscow would increase the capabilities of its ground-based strategic nuclear arms.

“One of the main destructive factors complicating the international situation is how the US is acting as it attempts to retain its dominant role in the world,” he said in comments released by the defence ministry.

“It is for these purposes that Washington and its allies are taking comprehensive, concerted measures to contain Russia and discredit its role in international affairs.”

Signed in 1987 by then US president

, so it puts no restrictions on other major military actors like China.

Pompeo said at a meeting with fellow

foreign ministers on Tuesday that there was no reason why the US “should continue to cede this crucial military advantage” to rival powers.

NATO said it was now “up to Russia” to save the treaty.

The Trump administration has complained of Moscow’s deployment of Novator 9M729 missiles, which Washington says fall under the treaty’s ban on missiles that can travel distances of between 310 and 3,400 miles (500 and 5,500 kilometres).

The nuclear-capable Russian cruise missiles are mobile and hard to detect and can hit cities in Europe with little or no warning, according to NATO, dramatically changing the security calculus on the continent.

The State Department said in a statement Tuesday that it had provided Moscow with “more than enough information for Russia to engage substantively on the issue”.

The information included details on the missile’s test history and the names of companies involved in developing and producing the missile and its launcher, the State Department said.

US-Russia ties are under deep strain over accusations Moscow meddled in the 2016 US presidential election.

The two states are also at odds over Russian support for Bashar al-Assad’s regime in Syria’s civil war, and the conflict in Ukraine.

The Latest: Police arrest about 90 in raids on Italian mafia – The Washington Post

BERLIN — The Latest on raids on the Italian mob across Europe (all times local):
12:10 p.m.
Police say they have arrested about 90 suspected mafia members in a series of coordinated raids in four European countries.
The arrests in Italy, Germany, the Netherlands and Belgium came as part of an investigation codenamed Pollino that was launched in 2016 against the ‘ndrangheta criminal group on allegations of cocaine trafficking, money laundering, bribery and violence, said Eurojust, the European agency that fights cross-border organized crime, which coordinated the operation.
Dutch chief public prosecutor Fred Westerbeke said Wednesday dozens of raids also netted about 2 million euros in criminal proceeds as well as drugs including ecstasy and cocaine.
___
8:55 a.m.
Authorities are conducting coordinated raids in Germany, Italy, Belgium and the Netherlands in a crackdown on the Italian mafia.
German federal police said in a statement Wednesday that there had been multiple arrests in the early morning raids on premises linked to the ‘ndrangheta, a southern Italy-based organized crime group.
In Germany the focus was on the western state of North Rhine-Westphalia, which borders the Netherlands and Belgium, and Bavaria to the south.
Police say the operation is being coordinated by Eurojust, a European unit established to fight cross-border organized crime
Further details were not immediately available but a news conference was scheduled for later in the day in The Hague.

M.N.: Investigate the entire upper echelon of the Obama’s FBI! The least that they can be accused of is the manifest and obvious, utter professional incompetence. The worst, no one wants to think and to talk about. They made the FBI and the American political system the laughing stock of the world. They undermined the American and the Global Security.

M.N.: Investigate the entire upper echelon of the Obama’s FBI, and consider bringing the criminal charges against all the former and current FBI officials! | Bill Priestap, a 20-year veteran of the FBI, will exit the agency at the end of the year, according to a new report. – WSJ | FBI News Review

Investigate the investigators! Save America! Reform the FBI now!

M.N.: Investigate the entire upper echelon of the Obama’s FBI, and consider bringing the criminal charges against all the former and current FBI officials who were involved in “Clinton emails investigation” (which was designed by the adversaries, and was used to divert the resources), and “Trump – Russia NON-INVESTIGATION” for this fundamental, historical, unprecedented failure of the American Counterintelligence which is primarily the responsibility of the FBI.
The least that they can be accused of is the manifest and obvious, utter professional incompetence. The worst, no one wants to think and to talk about. They made the FBI and the American political system the laughing stock of the world. They undermined the American and the Global Security.
Investigate all of them in fullest and in-depth!
Saved Stories

Another High-Ranking FBI Official to Depart

Wall Street Journal–7 hours ago
WASHINGTON—A top FBI official who helped oversee two politically … Bill Priestap, who currently serves as assistant director of the Federal … shortly before Election Day after obtaining new evidence, with some saying that it …

After a Hiatus, China Accelerates Cyberspying Efforts to Obtain US …

Bill Priestap, a 20-year veteran of the FBI, will exit the agency at the end of the year, according to a new report.
Priestap, the assistant director of the Federal Bureau of Investigation’s counterintelligence division, has decided to retire from the bureau, the Wall Street Journal reported.
He was involved with the investigation regarding the unauthorized email server of 2016 Democratic presidential candidate Hillary Clinton that she used while she was secretary of state and the investigation examining Russian interference in the 2016 election and whether the Trump campaign colluded with the Kremlin.
With officials like former FBI Director James Comey and Deputy Director Andrew McCabe no longer at the FBI, Priestap is currently the last high-ranking official at the FBI who originally worked on both investigations.
The investigations have come under fire from both Republicans and Democrats, who have cited mismanagement issues in both. For example, Democrats have expressed frustration that the FBI shared they were conducting an investigation into Clinton prior to the election but waited until after the election to disclose they were also investigation Russian interference.
Meanwhile, Republicans fault the FBI for going easy on Clinton and not charging her with any wrongdoing and have claimed that the FBI inappropriately obtained a surveillance warrant to monitor a Trump campaign aide.
The FBI told the Journal that Priestap’s retirement was unrelated to the 2016 investigations and said he “became eligible to retire and has chosen to do so after 20 years of service.” It’s uncertain what Preistap plans to do following his retirement.