Three Israelis who recently returned from Denmark are showing coronavirus symptoms, Hebrew media reported Monday, amid a special Health Ministry effort to ensure that apparent coronavirus mutation found in minks does not enter the country.

The Health Ministry said on Monday that it was performing special testing on some 180 Israelis who recently returned from Denmark.

Channel 12 reported that three of them are already exhibiting coronavirus symptoms and officials were testing to see if they were possibly infected with the varient strain.

Israeli officials said chances were thought to be low that any of the travelers would be carrying the mutated strain, which so far has only been found in 12 people in Denmark.

“The likelihood of a patient carrying the mutation into Israel is low,” the ministry said. “At the same time, we are exercising caution.” 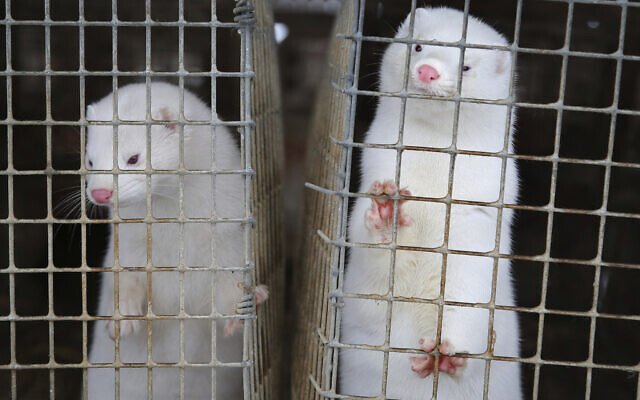 In this Dec. 6, 2012, file photo, minks look out of a cage at a fur farm in the village of Litusovo, northeast of Minsk, Belarus. (AP/Sergei Grits)

The ministry said that it was contacting all the relevant travelers, additionally noting that Denmark was now a “red” country and that anyone arriving from there was required to immediately enter isolation for 14 days.

“It’s really frightening,” one recently returned traveler told Channel 12. “I did not think about it. I returned to Israel with my small children and I will be getting tested.”

Viruses such as the novel coronavirus that emerged in China late last year mutate constantly and new variants are not necessarily worse than the previous ones. The mutations have even helped researchers track the sources of outbreaks in various countries.

So far, no study has shown newer SARS-Cov-2 variants to be more contagious or dangerous than their predecessors. 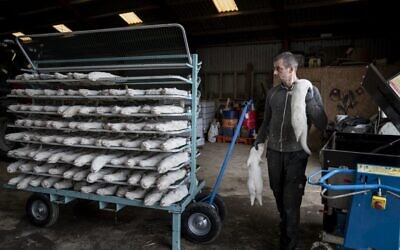 An employee removes dead mink from a chamber after they were gassed as they have to kill off their herd, which consists of 3,000 mother mink and their cubs on their farm near Naestved, Denmark, on November 6, 2020. (Mads Claus Rasmussen/Ritzau Scanpix/AFP)

The contamination of minks is not new, with breeders in several countries, including the Netherlands, Spain, Sweden and the United States, reporting cases. A few cases of humans being infected by minks have also been reported.

Nonetheless, Danish Prime Minister Mette Frederiksen said Wednesday that there were concerns the variant could impact a potential vaccine’s effectiveness.

He said the country would kill more than 15 million minks.

Denmark has been specific in describing how the different strain of the virus jumped from mink to man.

“According to the information from Danish authorities, this virus is neither more pathogenic, nor more virulent,” specialist Gilles Salvat at the French health agency Anses told AFP. 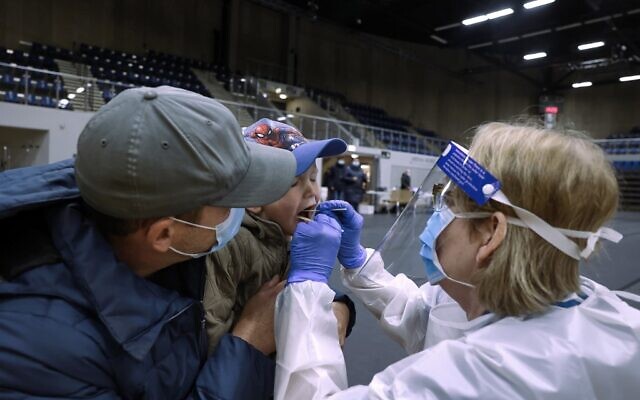 A child opens his mouth as he is being tested for coronavirus COVID-19 during a mass testing in the Arena Nord in Frederikshavn, in Northern Jutland, Denmark, on November 7, 2020 ( Claus Bjoern Larsen / Ritzau Scanpix / AFP)

There is concern, however, that a variant “emerges like a second virus and dominates the population,” he noted.

“Coming up with a vaccine for one strain is already complicated, and if we have to do it for two, four or six strains it is even more complicated,” the specialist noted.

He considered the decision to cull Danish mink to be a “precaution.”

Cull is ‘justifiable from health perspective’

Francois Balloux, who teaches at University College London, agreed, telling AFP: “This measure is entirely justifiable from a health perspective to eliminate the transmission source of a serious virus.”

He nonetheless also felt that “evoking the risk that mink could generate a second pandemic seems excessive and counter-productive in the current fearful climate.”

Balloux noted that similar mutations exist within the population already and have not spread.

“We know this virus with the same mutations emerged on mink farms, was transmitted to humans and did not spread widely,” the professor said.

All the same, it was not “completely impossible” that the new strain “could spread and render vaccines less effective,” he acknowledged.